A series of works by artist Carlos Cruz-Diez, including a shipping container illuminated by gradients of coloured light, were installed on the sand during Miami art week.

Presented by the Museum of Art at Savannah College of Art and Design (SCAD), the travelling Chroma exhibition brought together several of Cruz's pieces that demonstrate his colour theories.

They ranged from large-scale public artworks to wall-mounted designs and a set of three documentaries, all of which provide an overview of the 94-year-old Venezuelan artist's long career.

"Chroma considers Cruz-Diez's fundamental concerns regarding the transformative possibility that colour is diachronic and unstable, dependent on individual perception, space and context," said SCAD, which displayed the exhibition on its campus for most of this year before bringing it to Miami.

The pieces were installed in and around the Untitled art fair pavilion on the beach last week, while Art Basel, Design Miami and host of other fairs also took place.

Along the route to the Untitled tent, a white shipping container hosted a work called Chromosaturation. Inside, a series of connected chambers were illuminated by over tube lighting in blue, orange and green successively.

In the passage joining the spaces, the colours overlapped and blended to create a rainbow-like gradient across the walls, ceiling and floor.

On the long sides of the container, different-coloured fins were mounted so they alternated to create an optical illusion – tricking the brain to see more hues where they overlapped.

These types of illusions form the basis of Cruz-Diez's colour theories and were also demonstrated in a collection of smaller works on show inside the Untitled pavilion.

"Cruz-Diez's works are — aside from their aesthetic uniqueness — provocations completed by the viewer's movement in the artist͛s chromatic environments, where objects deliver a profound viewer experience," said SCAD.

The artworks were accompanied by interactive displays that explained how the illusions work, along with biographical information about the artist's life and career to date. SCAD also presented a booth of work by alumni artists at the fair.

Chroma was on show for the duration of Miami art week, which took place 6 to 10 December 2017. Also presented was Es Devlin's immersive installation at the Miami Beach Edition Hotel, Studio Drift's swarm of illuminated drones and Carsten Höller's pop-up nightclub for Prada.

Photography is courtesy of the Savannah College of Art and Design. 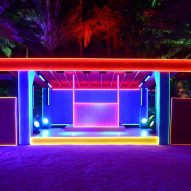