The masterplan by Jacques Herzog and Pierre de Mueron's Basel-based firm will transform a commercial area of the city into a new urban quarter, with high-density residential blocks and two new parks.

Three slim, cylindrical towers are planned – one at 160-metres tall and two at 135-metres – along with a row of 30-metre-high cubic residential buildings. A new city park will fill the space around the towers.

An existing MParc shopping centre will be enlarged and given a green roof, accessed by a green ramp filled with winding pathways and trees.

The OBI building supplies centre on the site will be relocated to a new building that resembles giant glass houses opposite the shopping mall.

Currently the Nordspitze, the northernmost part of the Dreispitz area in Basel, is given over entirely to commercial and retail use, with a large car park for the MParc. The new masterplan will reduce the number of car parking spaces and relocate them.

The master plan will be a collaboration between Herzog & de Meuron, the City of Basel, Switzerland's largest retail company Migros, and non-profit public foundation Christoph Merian Stiftung, which owns the land.

"The chance to work on this project is of particular significance for us," said the architects.

"It will give us a chance to further manifest the ideas we generated together with Rémy Zaugg in Eine Stadt im Werden? in 1991, and our investigations in Vision Dreispitz in 2001."

Eine Stadt im Werden, which translates as A Nascent City, is study of Basel's political, environmental and urban structures that examines how future visions of the city were emerging at the time, and Vision Dreispitz a book the architecture practice released on the same subject.

The project is still at the planning stage, with the finalised plans due to be submitted to the council in 2020.

If built to the full height of 160-metres, the new residential towers would be three times higher than Basel's current tallest residential buildings the Sky Lights Schoren, which are 51 and 57-metres tall.

Most tall buildings in Basel are currently commercial, such as the Roche Tower, which is owned by pharmaceutical company Hoffmann-La Roche was also designed by Herzog & de Meuron. At 178-metres it is the tallest building in Switzerland.

Herzog & de Meuron, which came in at number 4 on the inaugural Dezeen Hot List, recently won a contest to design offices for a Swiss bank on the shores of Lake Geneva.

The practice has also unveiled their designs for a £108 million campus for the Royal College of Art in London, which will feature a sawtooth roof and brickwork similar to the recent extension to the Tate Modern galleries. 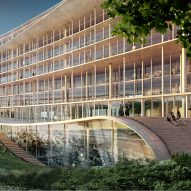