Sheepskin armchairs based on Goldilocks and the Three Bears feature in this range of furniture by French designer Pierre Yovanovitch, displayed in New York earlier this year.

Yovanovitch created the chairs among 24 custom designs, for an exhibition titled OOPS at Tribeca gallery R & Company – his first show in the US.

Known as the Bear Armchair, the design was already a staple in Yovanovitch's portfolio. But the ursine shape was upholstered in sheepskin for the showcase and produced in three different sizes: Papa Bear, Mama Bear and Baby Bear, just like in the fairytale.

Each has soft rounded forms, ear-like protrusions at the top of the backs, and spherical wooden feet.

Black pendant lamps look like they were sculpted from a viscous liquid, and patterned using a palette knife.

Another set of lights was named ET, due to a resemblance to the loveable alien in Steven Spielberg's 1982 movie.

OOPS was displayed at R & Company from 7 September to 19 October 2017, as part of the gallery's annual guest curator series.

For the exhibition, Yovanovitch also selected historical and contemporary pieces from R & Company's permanent collection, as well as artworks from other American and French galleries. These included items by the LA-based Haas Brothers and Senegalese designer Babacar Niang.

"In this exhibition, I wanted to reference vintage design in addition to showcasing contemporary works," he said.

"I sought to make it, in a way, a dialogue between 20th and 21st century design – while I have a passion for contemporary works, I also feel as though paying homage to historical design disciplines is an act of respect as a designer."

The designer previously worked in the menswear atelier of Pierre Cardin before switching focus to interiors and furniture, setting up his own studio in Paris in 2001. 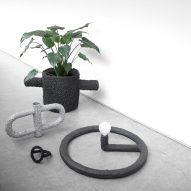 Photography is by Jean-François Jaussaud of Luxproductions.