Studio11 has combined industrial finishes with plush furnishings and colourful art to create the interior of its own workspace in Minsk.

While they chose to keep many of the space's raw finishes, they also added flashes of colour and texture, as well as objects that reflect the tastes and history of the team.

"It is safe to say that this space gathers up our professional preferences and is a physical expression of personal philosophy in design," said the trio.

"Here, one can find a number of techniques and objects that were used in our projects," they continued. "Things like this are very dear to us. They fill the workspace with personal history and additional internal meaning."

Walls throughout the studio have a rough plaster finish, but the lowest section has been painted into a rich blue tone. A matching effect can be seen on curtains that stretch floor-to-ceiling.

This blue tone contrasts with other elements in the space, from the salmon-pink counter in the kitchen to a red chair and stool in the lounge area. It also creates a striking backdrop to the various artworks, particularly a large painting by Belarusian artist Zakhar Kudin.

This painting is positioned directly above an upholstered blue daybed, creating what the architects describe as "a rather fin de siècle image, a modern interpretation of the Barcelona daybed by Mies van der Rohe set against a Matisse story".

"The bodacious spirit of the painting reminds of the Fauvists' works at the beginning of the previous century," they said. "Such expression organically smooths the restrained character of the space."

The floor surface is provided by a rough concrete screed, painted in a very light shade of grey.

Other interesting additions to the space include a small glass-block partition, which separates a private study desk from a tall chest of drawers, and an assortment of large plants.

Studio11 describes itself as an architecture and design studio, but specialises in interior design. Past projects include a Soviet-inspired interior for gaming company Vizor.

The studio's new office is usually occupied by six or seven designers, although the number often varies, say the designers. "Sometimes there are fewer of us, sometimes more, since we are in constant motion and exploring new opportunities for our projects," they concluded. 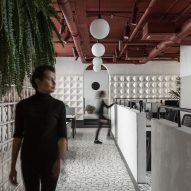