The architects of Belarusian office Studio 11 looked to their country's past when designing the offices for gaming company Vizor, combining Soviet-era details with bold red walls and modern lighting.

The Vizor offices are located in Minsk, Belarus, among rows of modernist buildings from the 70s and 80s. Studio 11, also based in the city, wanted to reflect the office's surroundings through its design.

"If you look at our society you can still find many traces of the Soviet era present," said the team.

"This is embedded both in people's way of thinking and lifestyle as well as the architectural environment: the interior of the subway we take was designed in the 70s and 80s, and the streets are full of modernist buildings of those times."

Although the studio look back on this period fondly, they say the general attitude towards the Soviet aesthetic is that of "disdain".

Because of this, they chose to reinterpret the Soviet elements they used, giving them a more contemporary aesthetic.

"We focus public attention on the aesthetic value of this trend," said the designers.

The open interior benefits from plenty of natural light. This made it possible paint walls and ceilings in a bold red colour, without the risk of overpowering the space.

Flooring was inspired by Soviet public buildings, and features a pattern of small tiles in different geometric shapes.

The office's entrance is defined by rose-coloured glass blocks, and is topped with green hanging plants.

The company's name is displayed on brass sheets. The style, font and material were chosen based on inscriptions found in old Soviet underground stations.

One of these work zones is formed by low partitions, while the walls of the second workspace are finished with wood panels. 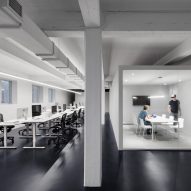 Soviet architecture has recently been investigated through a number of photo essays, ranging from Peter Ortner's images of bus stops, to Rebecca Litchfield's documentation of monumental structures.

Other examples include BACU's images of buildings in the former Eastern Bloc and Nicolas Grospierre's photographs of modernist architecture across five continents.