British architect Will Alsop has created metro stations in Toronto's Pioneer Village and Finch West neighbourhoods, as part of an initiative to create more public transit options in the wider metropolitan area.

The two stations form part of the Toronto-York Spadina Subway Extension Project, which extends Toronto's subway system through to York, a suburban district of the city. Both stations are located on the outskirts of the city.

Both are distinguished by their cantilevered roofs, polished concrete interior walls, and pops of colour throughout.

Black and white stripes cover the exterior of Finch West, with a large red window on the second storey of its entrance. Pioneer Village contrasts with its rust-toned palette and is clad in weathered steel, with an enormous geometric canopy roof on one portion.

"The subway station entrances were designed as a pair of sculptural structures; their height exceeding that necessary, to increase their visibility," said a statement from Alsop.

At Finch West, the two-storey building is surrounded by geometric concrete pillars, representative of art deco designs. Exterior black-and-white stripes are replicated inside on the ceiling and along floors down inside the metro platform.

Pioneer Village, in contrast, is covered in weathering steel. A huge cantilevered roof creates a covered space for two regional bus terminals, and is topped with planted with meadow grasses. The station is located on the border of York, and anchors a corner lot of York University.

Inside are polished concrete walls, similar to those Finch West, with angled supporting columns down in the platforms. A suspended array of 40 light designs by Berlin studio Realities:united run along the ceiling, and display text-based messages sent from passengers.

Alsop's equally bold Ontario College of Art and Design is located closer to Downtown Toronto, and received the first RIBA Worldwide Award in 2004.

His colourful Peckham Library in London also won the RIBA Stirling Prize in 2000.

Photography is by Wade Zimmerman. 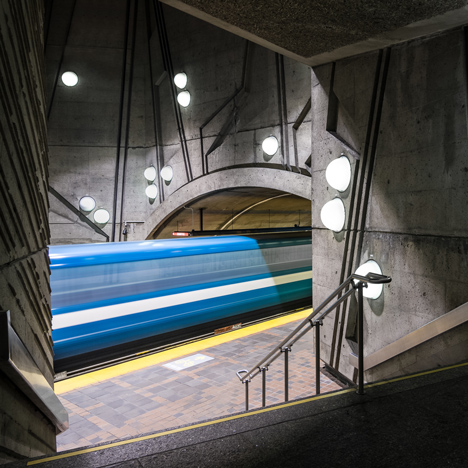