London-based practice Aberrant Architecture has worked with five north London schools to create an igloo-shaped installation, as part of an initiative to introduce young people to architecture and design.

The Storytelling Igloo project was carried out in collaboration with local arts centre Artsdepot. It saw 140 children between the ages of eight and 14 get involved in building and designing the structure using 3D computer modelling software and CNC moulds.

During the process, the children were encouraged to explore ideas of what it means for a space to be meaningful, as well as learning creative and technical skills necessary to architecture and design practice.

To begin with, the students were encouraged to draw ideas relating to their own identity and sense space on pieces of paper, which were then hand-modelled into prototypes.

"Students of all ages, backgrounds and abilities could relate to universal questions about spaces of pleasure, security, leisure and individual preference," said the architects.

"This process allowed children to compare the relative ease of 'modelling' three-dimensional forms by hand as opposed to digital translations," they continued.

Each bespoke design was then modelled using three-dimensional modelling software, before being transferred into CNC modelled moulds, which were produced in collaboration with the University of Westminster Fabrication Laboratory.

The architects then used papercrete – a construction material made from recycled paper and adhesives – to form the bricks themselves.

"Young people are often made to assume that sophisticated computational technology always makes things easier, but this part of the process allowed them to experience the more immediate and intuitive possibilities of hand-craft," said the team.

Each of the five schools was assigned an individual colour – pink, purple, yellow, green and blue – which were used to create variation amongst the 300 bricks.

Clay ornaments were added to some of the finished bricks and lintels were customised with the names of each participating school, as a way of  "enabling the young builders to take ownership" of their work.

Each brick was then numbered and labelled before they were assembled by a team of volunteers including graduates from The Cass and Artsdepot staff.

"We are pleased to build on our experience and research working with young people, with schools and the wider school community," said David Chambers, co-founder of Aberrant Architecture.

"At a time when cultural funding is under threat, it is great to be able to share skills and impart the importance of creative processes in architecture and design with a new generation," he continued.

The Storytelling Igloo was on view at a free exhibition in the Apthorp Gallery at London's Artsdepot from 13 to 31 December 2017.

Aberrant Architecture was founded by David Chambers and Kevin Haley in 2010. Since then, the studio has completed a range of architectural projects and installations – from a styrofoam ceiling installation celebrating time-wasting at work, to a tiny mobile performance venue that toured around London's Waterloo. 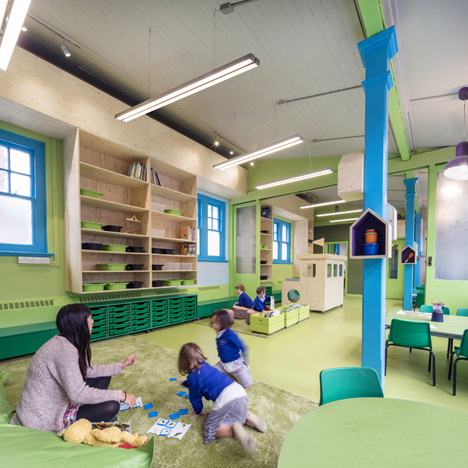