Visitors to an office-themed installation by Aberrant Architecture were invited to take a spin on an office chair below a ceiling suspended just 1.5 metres above the ground (+ movie).

Aberrant Architecture worked with students from Canterbury School of Architecture to design an installation named Despite Efficiency for the university's Herbert Read Gallery. 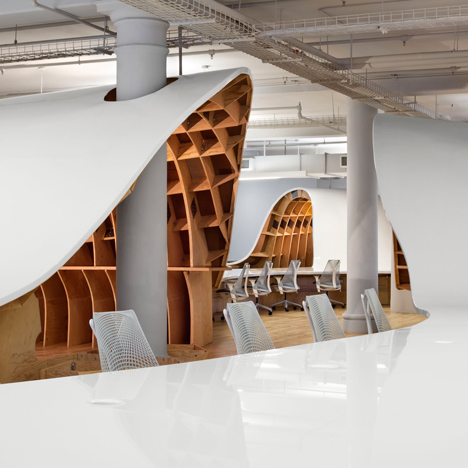 Conceived as a "celebration of time wasting at work", the installation mimicked an open-plan office with an unnaturally low ceiling of styrofoam tiles held in a metal grid, supported by thin white columns.

Anglepoise-style desk lamps were suspended around the edges to light the space, while a series of openings allowed visitors to pop their heads above parapet level to see a range of multi-media installations and "experience the naturally lit world above the suspended ceiling."

"In a slight twist on the norm, this staple of offices the world over is positioned at shoulder height," said the architects.

"Hanging 1.5-metres off the floor, visitors to the exhibition are invited to take an information sheet from a filing cabinet, sit on an office chair and propel themselves underneath the ceiling into an artificially lit world."

Video projections and laser-cut dioramas depicting office scenes installed above the styrofoam tiles offer clock-watchers something to fill their time.

Binoculars chained to the openings provide close-up views of details on each of the laser-cut panels, which were made by participating students to explore the history of office design.

"The exhibition, as well as the design concept, looks at the practical consequences and critical value of inefficiency in the context of work," said the architects, who have designed a number of non-permanent structures, including a roaming market stall and travelling theatre.

"Inefficiency can be understood as an effort without reward; as the negative result of a system designed to produce a benefit, to be profitable," they said.

Over its three-week duration in December 2014, the exhibition hosted a series of live performances and video installations presented by a programme of international artists "interested in situations and models of unprofitable, futile or ineffective work."