New York design brand Pelle is launching a set of small pendants and sconces, which are encased by triangular metal frame that diffuses light in different directions, at the Interior Design Show in Toronto this week.

Pelle's Tripp Mini lighting is being presented at IDS Toronto as an update to its Tripp sconce, pendant and table lamp series.

The triangular framework devised by the studio to reflect light in multiple ways is the same as found in the collection from 2014. But the new additions are much smaller, to make them useable in a wider variety of spaces.

"We were interested in manipulating light within a more sculptural form," studio founders Jean and Oliver Pelle told Dezeen.

"The light softens the form when it gradually emanates across the three fins that form the body of the Tripps," they continued. "The light radiates onto the floor and wall in soft patterns stemming from the triangular geometry of the fins."

Both the updated pendant and sconce feature metal panels running along the three longer edges of a six-sided base, slightly extending at one side. Gaps are left along the shorter edges so that light reflecting of the metalwork can filter out.

The sconce then attaches to the wall via a circular base, while the pendant light hangs from a cylindrical support.

All the metal pieces are welded together to form the hard geometric outline and the join is left exposed, although the studio hopes that the light reads as coherent.

"Even though they are quite small, we think they are monolithic at the same time," said the pair.

"The minimal lines of the Tripps leave no place to hide any connections or traces of the making process. All welds are in sight, while they are supposed to be not noticeable."

Two new materials – weathered steel and stainless steel – have also been introduced to the series, accompanying the brushed-brass in the existing Tripp range.

While the stainless steel has a cleaner finish, the designers chose the pre-rusted steel to emulate industrial-style buildings. They experimented with applying a variety of acids to the surface before settling on one that achieved the desired finish and texture.

"Once we found something that worked in terms of colour and effect, we tested how to deliver the acid from submersion, to brushing on, to spraying to dabbing," they said. "In the end it took a bit of everything, and some patience to let the acid do its work."

Jean and Oliver met while studying architecture at Yale in the early 2000s before co-founding Pelle in 2011.

In 2016, the pair relocated their showroom, workshop and offices from Brooklyn's Red Hook to a self-designed space in Manhattan's Flatiron District.

Pelle's other projects include a range of modular, stick-style lighting that can be configured into simple or complex shapes.

IDS Toronto is taking place at the Metro Toronto Convention Centre from 18 to 12 January 2018. 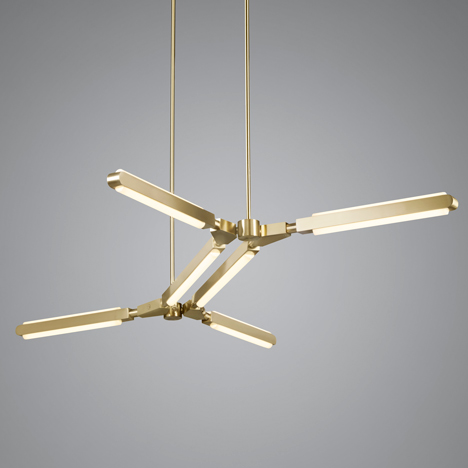