Ironspot brick and a sawtooth roof define the exterior of this new wing for the University of Michigan's architecture and planning college, designed by US studio Preston Scott Cohen.

Located on the university's campus in Ann Arbor, the Taubman Building adjoins the existing Art and Architecture Building – a low-slung, brick-and-glass structure that opened in 1974 and was designed by Robert Saarinen Swanson, the grandson of Eliel Saarinen. It houses the Taubman College of Architecture and Urban Planning, along with the Stamps School of Art & Design.

In 2009, the architecture and planning department set out to expand and upgrade its facilities. Preston Scott Cohen – an architecture studio based in Cambridge, Massachusetts – was chosen for the project, which entailed creating a new 36,000-square-foot wing (3,344 square metres) and renovating 11,000 square feet (1,022 square metres) of existing space.

One of the greatest challenges was giving the new addition high visibility and connecting it to Bonisteel Boulevard, a major artery running through campus. The goal was to make the wing "act is if it is the centre of the school, in order that it will serve as the nexus of circulation for all students and faculty".

In response, the team envisioned a linear building placed at an angle, with the north end gesturing toward Bonisteel. The building is topped with a distinctive sawtooth roof and is wrapped in two tones of grey ironspot brick, which is glazed to help the surfaces become impervious to water and dirt. Exterior walls are punctuated with windows of varying shapes and sizes.

"The facades combine modest vernacular and cultural building character," the studio said. "The brick pattern, which weaves running bond and soldier's coursing, is composed to formalise implicit shadows or folds that extend from the sawtooth profile to the windows."

The southern portion of the wing is lifted up on pilotis, forming a sheltered area at ground level for bike parking and an outdoor gallery for student projects. The covered area connects to an existing courtyard.

"It also resolved the disparity in height between the new plenums and the existing building, and thereby established an ascending and continuous sequence of interior spaces."

Inside, the ground floor houses a large classroom and faculty offices. Interior finishes include concrete floors and white paint, which were used throughout the school.

The second floor contains a range of programmatic elements – studios, offices, meeting rooms, reading rooms, and a lounge. The central feature is a double-height atrium ringed by ramps and stairs.

"The main space, called the commons, is composed of two pairs of ramps linked by a spiral-like suspended stair," the team said. "The solid parts of the railings are kept low to enable viewing of the central space from afar and to articulate a remarkable scale effect."

Designed to be highly flexible, the commons can accommodate jury reviews, dinners, lectures and other special events. It also can serve as a work area for large fabrication projects.

The third level – a partial floor that overlooks the commons – contains a large studio space with tall windows and "bays" formed by the sawtooth-shaped roof.

"The ceiling combines the loft-like lighting and spatial proportions of a gallery with the Midwestern factory-like workspace environment," the architects said. "This combination will give the school a feeling that is very rare, very exceptional."

Overall, the building was imagined as a fluid procession with clearly defined moments. "The entire sequence of the building is experienced as a promenade composed of distinctive architectural episodes," the studio said. "Wayfinding becomes an architectural narrative."

Founded in 1989, Preston Scott Cohen is known for creating buildings with complex geometries. Other projects by the studio include the Tel Aviv Museum of Art, which features faceted concrete facades, a triangular plan and a spiralling atrium. 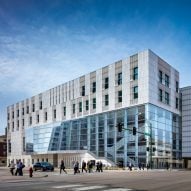