Dutch architecture firm MVRDV has won a competition to design a 78-metre tall mixed-use building with a red ceramic facade, to be a symbolic gateway to Moscow.

MVRDV – which ranked at number 15 on Dezeen Hot List 2017 – was selected by developer GK Osnova to design the mixed-use complex for a prominent site in the centre of the Russian capital.

Named Silhouette, the 52,000 square-metre complex will contain luxury apartments on the upper floors, as well as a sports centre, offices, an event space and a roof terrace, plus a supermarket and parking placed underground.

Designed using a modular system the building will be sculpted to create distinctive entrance and a sloping roofscape, with the red-colour of the facade taking inspiration from the neighbouring constructivist buildings.

It will be located on a corner plot at the intersection of Academician Sakharov Avenue and Sadovaya-Spasskaya Street, opposite the constructivist Ministry of Agriculture designed by Soviet architect Alexey Shchusev, and near Le Corbusier's Tsentrosoyuz Building.

Together, the Ministry of Agriculture and the Silhouette are expected to create a new symbolic gateway into Moscow.

"Silhouette is really an abstraction of the classical building silhouettes found in the city," said Jacob van Rijs, co-founder of MVRDV.

"The combination of two grand and warm-toned buildings not only create a symbolic gateway to the city centre, but also homely dwellings and fine workspaces with a lively programme on ground levels for all to enjoy."

Based in Rotterdam, MVRDV is led by Van Rijs, along with Winy Maas and Nathalie de Vries. The studio also recently unveiled plans to build a cluster of mixed-use towers in Abu Dhabi, which will frame a public square designed by Danish studio BIG. 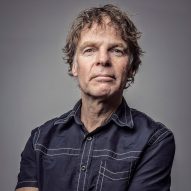 Architects are suffering from "originality syndrome" and should copy more, says Winy Maas