Designers can't solve real-world problems on their own, according to designer Bernhard Lenger, whose latest project sees creatives team up with human-rights defenders to develop tools for change.

Speaking to Dezeen at the launch of his project We Are Human Rights, Lenger said that design is a powerful tool that can be used for much more than simply creating chairs and tables. But designers need to partner with other "changemakers" to have a real impact.

"As designers, we are shaping parts of our world, so there is a part we can play in creating a positive impact," he said.

"But," he continued, "designers should not be portrayed as the heroes of our time, as we are only a small cogwheel in an enormous machine."

Born in Austria but now based in Eindhoven, Lenger often takes a political stance through his work. We Are Human Rights is the first instalment in his We Are initiative, which he describes as a platform for tackling issues through "design thinking".

Lenger is pairing designers up with lawyers and activists

The project pairs designers with various human-rights lawyers and activists, and asks them to come up with ways to help one another. It could be that the activist needs a tool for protection, or that they would like a physical object to represent what they are trying to achieve.

"Think of it as a kind of consultant agency, an organisation that people, governments or NGOs can turn to and get support," Lenger explained.

Over the coming months, seven designers will each meet up with the human-rights defender that they have been paired up with – giving them the chance to establish the project they set out to do, and discuss how each other's expertise can be applied.

Through the Netherland's Shelter City Initiative, which provides those at risk in their own country with a place to stay, the human-rights defenders can stay abroad for three months.

Lenger envisages this will give them enough time to build a relationship, before returning to their native country. The designer then visits them, to get a first-hand experience of the issues they are trying to solve.

"This aspect is important, as the designer has to understand several facets of the problem," he said.

The results will be presented in an exhibition in Dutch city The Hague later this year, coinciding with the 70th anniversary of the Universal Declaration of Human Rights.

Lenger was one of the speakers for Dezeen's Good Design for A Bad World talks programme at Dutch Design Week 2017, where panellists – mainly designers – were invited to discuss how design could help tackle real-world issues.

Speaking during a talk focused on pollution, Lenger presented another project he has been involved in, called This is Ecocide.

Developed while he was studying at Design Academy Eindhoven, This is Ecocide saw Lenger partner with environmental lawyer Polly Higgins to develop a campaign to make ecocide – the destruction of the environment – illegal.

This project started with the discovery that ecocide was once recognised by the International Criminal Court as a crime, but was removed. With help from Higgins, he found that this was a result of lobbying from four countries: the USA, the UK, France and the Netherlands.

"I was like, what should I do? I was 25 years old graduating from Design Academy, how could I work on a field of international law?" he told the audience.

"So I thought, the only thing I'm good in is I can visualise things and build things. So I built Polly a stage and invited her and other professionals to speak about this law, about the doubts, about the benefits, about what can we do in the fields of law."

According to Lenger, he isn't unique in wanting to use to design to solve bigger problems. He said he had noticed a shift in the degree of responsibility felt by young designers.

"I think there's a change in general, but it's bad that people feel guilty. It's ironic in that sense, that design itself becomes the guilty aspect."

Lenger launched the We Are Human Rights project as part of another event during Dutch Design Week. It consisted of a programme of talks hosted by the defenders who will be involved in the project.

Places at the talks were limited, but visitors – mostly designers interested in joining the initiative – were encouraged to ask questions to get the ball rolling on potential projects. 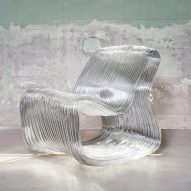