Designers are working harder than ever to create projects with a social and environmental conscience, according to the curator of an exhibition about "changemakers" at the Museum Boijmans Van Beuningen. Here's a look at seven figures leading the charge.

Annemartine van Kesteren curated the exhibition Change the System, which on show now at the Rotterdam museum. It reveals over 50 examples of designers trying to change the status quo in some way – from reducing pollution to preventing political tensions.

The curator claims that, while the design process itself hasn't changed, designers are increasingly thinking about the wider impact of the products they create.

"I think designers are designing in the same way, but they are realising that it doesn't stop with the idea of making an object," she told Dezeen.

"They realise that if they want to have an effect, then they should really follow up their design process, do some research, show their results. I think this is a new mentality." 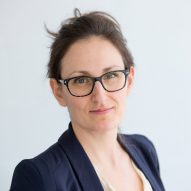 We need designers, not scientists, to show us how to change the world, says Babette Porcelijn

There are a wide range of designs featured in Change the System, from recycled plastic furniture and textiles, to more futuristic concepts, such as a vision to shrink humans. According to Van Kesteren, today's designers are coming up with ideas for new systems, as well as innovative products.

"One thing I learned in the creation of this exhibition is that there is nothing so solid and unchangeable as a system," she explained.

"Many of these people are saying that a system will never change itself, so you need these little steps," Van Kesteren added. "These people picking into that with a completely new set of thinking. The designers you see here are 'changemakers'. They are very important if we really want to change the system. They are humble yet impactful."

Change the System is on show at Museum Boijmans Van Beuningen until 14 January 2018.

Van Kesteren also presented some of the designs from the exhibition during the first of Dezeen's Good Design for a Bad World talk series at Dutch Design Week 2017, which questioned whether designers can solve global issues.

Here's our pick of the seven designers to watch from the show:

For his graduation project at Design Academy Eindhoven in 2013, Hakkens built his own plastic recycling machine. He then made the plans available online, and invited others to construct their own machines and share the results via his website.

Over four years later, his Precious Plastic machines (pictured top) have been adopted by more than 200 designers worldwide. For Change the System, he is showing some of creations this community has come up with.

Van Hoeckel's portfolio includes a travelling "embassy of the undocumented", which aims to facilitate open discussion around immigration in the Netherlands.

For this exhibition, she has installed a free laundrette in the entrance – creating a place where visitors can discuss the show's contents, and encouraging in people who would not usually visit a museum.

"People come here and bring their bag of dirty laundry, and for the 45 minutes that the machine is running, they go into the exhibition to see the collection," said Van Kesteren. "What happens there in the waiting time is that people engage with each other."

Like Hakkens, Dutch designer Dirk Vander Kooij works with recycled plastic. He developed his own robot arm to transform this waste material into chairs, vases and other useful items.

For his latest projects, including Not Only Hollow Chair, he has refined the technology to allow him to print hollow objects – allowing the material to go even further than before.

Klarenbeek experiments with different sustainable materials for use in 3D printing.

In the past he worked with mushroom mycellium, which he claimed "could be used to build houses". He has now teamed up with Maartje Dros to explore the potential of algae. Over the course of this exhibition, the pair have been growing algae in the museum's pond to produce bioplastic.

The duo's ultimate goal is to establish a local network of biopolymer 3D printers, called the 3D Bakery.

One of the most unusual projects in the exhibition is The Incredible Shrinking Man, a speculative proposal to shrink the the human population to an average height of 50 centimetres, as a way to reduce the volume of natural resources they consume.

Hendriks has been working on the vision for the past four years. He set up his own design studio in the exhibition, where he continued his research the viability of the idea.

Meindertsma first presented her Fibre Market project in the Fear and Love exhibition at London's Design Museum. It saw her transform 1,000 discarded woollen jumpers into piles of rainbow-hued piles of fibres.

For Change the System, she has taken the idea one step further. Working with recycled Donegal tweed, she has created a new textile and used it upholster a chair – to challenge the preconception that recycled materials can't be luxurious.

"It's beautiful how she turned waste into something classical," said Van Kesteren.

During the 2017 election in the Netherlands, designer and researcher Ruben Pater created a website, aiming to reveal how political parties make use of deceptive propaganda.

According to Pater, the Stemmingmakerij project had not ties to any political project – it was merely intended to make politics more transparent, and help voters to make better informed decisions.