Australian photographer Tom Blachford waited until night to capture these neon-tinted photographs of Tokyo's metabolist buildings, which he says could have been built in a "distant future".

For his latest series, Blachford was influenced by the futuristic appearance of the country's post-war modernist architectural movement, metabolism – pioneered by Japanese architect Kenzo Tange.

The Pritzker Prize-winning architect is largely recognised as the founder of the Japanese Metabolism movement, which came about in the 1960s following a period of economic recovery. Tange died in 2005, but his practice Tange Associates continues to operate.

Similar to his Midnight Modern series, which depicts mid-century houses in Palm Springs, Nihon Noir is photographed at night and without the presence of people. This was intended to evoke a sense of mystery.

To create images that look like they could have been taken in a future "cyberpunk metropolis", Blachford selected metabolist buildings for their industrial, megastructure appearance.

"My goal for the series was to communicate the feeling that struck me the first time I visited Tokyo, that somehow you have been transported to this advanced and amazing parallel universe," said Blachford.

"I selected a core list of buildings that embodied the Metabolist philosophy which attempted to combine the creation of brutalist megastructures with the principles of organic growth," he continued.

Among them are the Shizuoka Press and Broadcasting Center and the Fuji TV headquarters, both designed by Tange. Tighter shots of 1990s street vistas also feature in the series.

Blanchford also captured Kisho Kurokawa's Nagakin Capsule, which is composed of 140 prefabricated capsules. Scattered multicoloured lights from the inside apartments illuminate the photograph, along with the stark glow of white street lights.

"Though these buildings are from the past, they appear as if they have appeared from the distant future.  My intention is for the viewer to ask not 'where' they were taken but 'when'," said the photographer.

Blachford spent six consecutive nights taking photographs of buildings in the Japanese capital between 9pm to 5am, experimenting with a range of vantage points, including a rooftop, stairwell and a road workers crane lift.

"Each building required hours of exploration to find the perfect vantage point whether it be from a rooftop, stairwell or road workers crane lift I commandeered to capture the Nagakin from an otherwise impossible perspective," he explained. 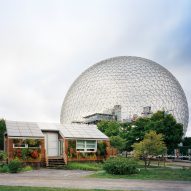