Mexican architect Frida Escobedo has been named as the designer of this year's Serpentine Pavilion, which is to feature a latticed enclosure surrounding a pool of water.

The architect, who was born in 1979 and set up her Mexico City-based practice in 2006, will be the youngest Serpentine Pavilion architect yet and the first solo woman to take on the project since the inaugural commission by the late Zaha Hadid, in 2000.

Her design is for a courtyard enclosed by dark latticed walls, made from cement tiles. It is intended as a play on the celosia – a typical feature in Mexican architecture that allows breeze to permeate a building.

The perforations will allow views into and out of the pavilion, while the mirrored underside of a curving canopy overhead will reflect the building and a pool beneath.

"My design for the Serpentine Pavilion 2018 is a meeting of material and historical inspirations inseparable from the city of London itself and an idea which has been central to our practice from the beginning: the expression of time in architecture through inventive use of everyday materials and simple forms," said Frida Escobedo.

"For the Serpentine Pavilion, we have added the materials of light and shadow, reflection and refraction, turning the building into a timepiece that charts the passage of the day."

The pavilion will comprise two rectilinear blocks set at an angle to reference the Prime Meridian – a line of longitude at London's Royal Observatory in Greenwich.

The pavilion will be open to the public from 15 June to 7 October 2018 in London's Kensington Gardens. It will host a cafe, as well as a programme of art, architecture, music, film and dance events.

Escobedo's varied oeuvre includes the conversion of the former home and studio of painter David Alfaro Siqueiros into a public gallery in Mexican city of Cuernavaca. She has also created interiors for two Aesop stores in Florida and an Aztec-inspired installation in the V&A in London.

The announcement follows the news that the Serpentine Pavilion for 2017, by Diébédo Francis Kéré, will find a new permanent home at a Malaysian gallery, following an extended run in London.

The Serpentine Galleries also recently announced its first Serpentine Pavilion commission outside the UK, a structured designed Chinese studio Jiakun Architects that will open in Beijing in May 2018.

Renderings are by Atmósfera. 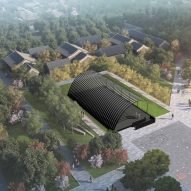