Frida Escobedo was invited by the London museum to create a summer pavilion in its John Madejski Garden – but she instead decided to create a flexible stage that can be reconfigured for different activities.

"A pavilion should be something that is activated and asks questions," the architect told Dezeen at a launch event. 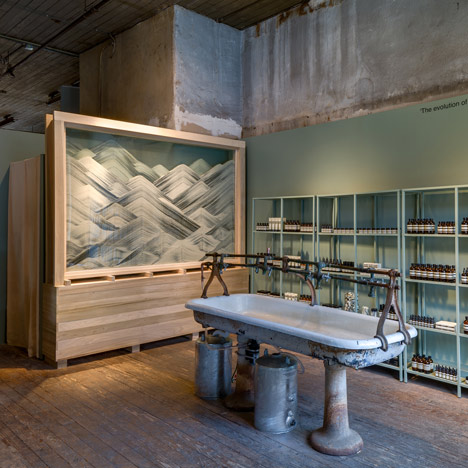 "It's more about the people and how they interact with the piece than the piece itself – the piece is secondary," she said.

Using the landscape of Tenochtitlan – an Aztec settlement that has since been engulfed by Mexico City – as a starting point, the architect planned a system of curved and rectangular steel-frame platforms that sit over the courtyard's lawn, paving and shallow pool. Each has adjustable feet so it can adapt to different levels.

They will remain on site for just over four months, but will be moved into several different arrangements during that time.

Together, they are intended to represent the many multicultural influences that coexist in contemporary Mexico.

"We used the Mexico City grid as a way of articulating these platforms, but not just in terms of having this nostalgic image of the land – we wanted to have something modular that could be reused and readapted to the museum's programme," said Escobedo.

"The whole idea was about this notion of wearing a mask," she added. "This is an appropriation of a space and it changes the face of the space temporarily, like a mask. And that generates different characters, just like in theatre."

The original aim was to give each platform a reflective stainless-steel surface. It was thought this would be too slippery, so the metal was sandblasted to create stripes – half mirrored, half opaque.

Escobedo was one of four Mexican architects shortlisted to create the structure, as part of a year-long celebration of Mexican culture in the UK.

It is entitled You Know You Cannot See Yourself So Well as by Reflection – a reference to Shakespeare's play Julius Caesar.

"It is a pavilion that embraces itself as much as it can," added Escobedo. "This is not who we are, this is my interpretation of what Mexico is, and it's more important for me to generate activity than to just present our culture."

It will remain in place until 2 October and will form an event space during the London Design Festival.

Images are courtesy of the V&A.