Danish brand Ferm Living has collaborated with Chinese furniture designer Mario Tsai to create a series of "flying" shelves, which seem to be mounted without the use of any fixtures.

After meeting Tsai at the Greenhouse section of emerging designers during last year's Stockholm Furniture Fair, the brand decided to collaborate with him for its new collection.

The Flying Shelf collection consists of a small series of two black, powder-coated metal shelves that utilises cylindrical and spherical fixtures to keep it suspended.

Both these elements are drilled into the wall. The thin shelf then rests atop of the cylinder, while being held in place by a small screw on the bottom of the sphere.

As these supportive elements disguise themselves as decorative features, the shelves look as if they are flying – with Ferm Living describing them as "an exercise in perfect balance."

"A shelf can be more than storage; the Flying Shelf of powder-coated metal with a geometry-inspired mounting is a little piece of art," said Ferm Living.

"It's a display of balance and geometry with distinctive elements, each playing their role in the design. The geometric pieces are both the mounting and vital parts of the seemingly flying expression."

The cylinder and sphere are available in both polished brass and chrome – a new addition to Ferm Living's material repertoire.

According to the brand, chrome has been "almost invisible" in the design world for many years but is a material that is slowly returning.

"In our design universe, the polished chrome creates a beautiful contrast to the soft textiles, the dim colours, and the ongoing exploration of textures," the Copenhagen-based firm said.

Since launching in 2006, Ferm Living has launched two seasonal collections of accessories, furniture and lighting each year, and describes its style as "contemporary with a touch of mid-century charm".

The Flying Shelves are being presented at the Stockholm Furniture Fair this week, which takes place as part of the city's annual design week.

The festival, which runs from 5 till 11 February 2018, has also seen Japanese designer Jin Kuramoto design a "100 per cent biological chair" using flax fibres and bio-resin. 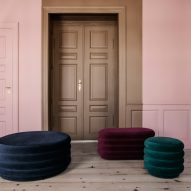