More images have been released to show the luxury amenities that will available to residents of Zaha Hadid's One Thousand Museum tower in Miami, which has reached its full height.

The 62-storey residential skyscraper – one of the late architect's last buildings – has topped out at 700 feet (210 metres) high.

With a curving structural "exoskeleton" that snakes in front of glass facades, One Thousand Museum joins a row of towers opposite Museum Park in Downtown Miami.

Its developers have marked the topping out ceremony by releasing a series of updated renderings showing its amenities, also designed by Hadid, to offer a preview of life for future residents.

"Even in its current state, the building already stands out as the most iconic architectural work on Miami's skyline," he added. "We're excited to have developed something so unique and special for Miami."

Among the facilities will be a swimming pool at top of the building, to be covered by a curving, faceted metal ceiling that will reflect the water.

The double-height space is occupied by the pool on one side and a seating area on the other – both with large expanses of glazing that offers views across the city and ocean.

The new images also shows that a bar for residents will be topped by a similar metallic canopy design. Other curvaceous forms in the project that are typical of Hadid's style include a bent roof above the gymnasium, which appears to be made from wood.

Comprising 5,000 pieces of lightweight glass-fibre-reinforced concrete, the building's exterior formwork is a visible feature of many of the communal areas, covering the windows of the gym and sheltering the adjoining terrace.

Chunky corner columns will extend over sunbathing areas beside the outdoor pool, raised on a podium that will contain parking, and public restaurants and retail.

Residents will also have access to a spa – including sauna, steam room and a rain shower – a multimedia theatre and private dining room. A helipad planned for the roof is expected to become the first for a private residential skyscraper in Florida.

Construction work is now underway on the building's interiors and the project is slated for an early completion later this year.

Inside it will include a mix of townhouse-style properties, half-floor apartments, and penthouses and duplex penthouses that occupy entire floors. One of the residences has already been completed and fitted out as a show home by Brazilian furniture brand Artefacto.

Another of Hadid's projects in the US, the 520 West 28th residential complex in New York's Chelsea, features a similar array of impressive host of amenity spaces, including a skylit swimming pool, a striated IMAX theatre and a bright gymnasium. 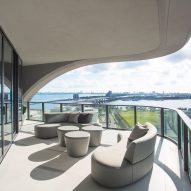