On show from 9 to 19 February 2018, Echelman's Madrid 1.78 sculpture was installed to celebrate the Plaza Mayor's 400th anniversary.

The temporary artwork hovers over the centre of the square, above a statue of the former king of Spain Felipe III – who oversaw the construction of the plaza during his reign in the 1600s.

Designed by Echelman as an exploration into the cycles of time, the piece is named Madrid 1.78 in reference to the number of microseconds that – according to NASA scientists – the day was shortened by in 2011 when the 8.9-magnitude earthquake in Japan shifted the earth's mass and sped up the planet's rotation.

"I feel a need to find moments of contemplation in the midst of daily city life," she said. "If my art can create an opportunity to contemplate the larger cycles of time and remind us to listen to our inner selves, I believe this can be the start of the transformation."

The sculpture is the latest addition to Echelman's ongoing Earth Time Series, which began in 2010 and has resulted in installations in cities across Europe, Asia, Australia, and South and North America.

For instance, her 1.8 artwork installed above London's busy Oxford Circus junction in 2016 was created using data of recorded wave heights during the 2011 tsunami in Japan.

For Madrid 1.78, Echelman said her goal was to remind the public of "the many cycles of time at various scales, ranging from a single day to the four centuries that people have gathered in the Plaza Mayor".

"In the last four hundred years people have gathered at Plaza Mayor to witness bull-fights and Spanish Inquisition burnings," said Echelman, who is known for her vast ethereal sculptures that are integrated with architecture.

"Today we gather together with art that explores our concept of time, to discuss ideas. This is a hopeful trajectory for humanity."

Suspended from four steel trusses which are stabilised with ballast, the sculpture was designed using a custom software created for Echelman by Autodesk.

To create the form, Echelman used super-strong polyethylene fibres, which are 15 times stronger than steel by weight.

These fibres are extruded, then braided, knotted, and spliced together to create a volumetric form that changes in response to the wind and weather.

Like Echelman's other site-specific city works, the sculpture is lit up by coloured lights at night.

"These netted works bring softness to the scale of the city," she said. "They are soft counterpoints to the hard edges of buildings, offering proof that we can interrogate the status quo – that the assumption that cities must be formed from hard materials and straight edges can be changed."

Although the sculpture will be taken down today, 19 February, it is designed to be both lightweight and flexible so it can be transported and installed in another location.

Photography is by Joao Ferrand. 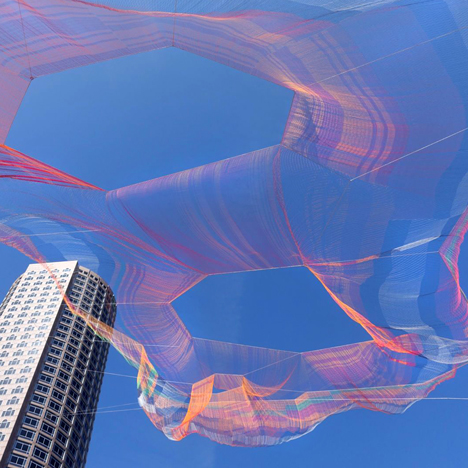