Scandinavian practice Henning Larsen Architects has unveiled plans to transform the east bank of the River Lagan in Belfast, Northern Ireland, using the redevelopment of Copenhagen harbour as a model.

The 6.5-hectare Belfast Waterside masterplan aims to make use of the outdoor spaces along the river in the winter months – looking towards the redevelopment of Copenhagen's harbour as a reference point.

In recent years, new housing, infrastructure and offices have transformed the Nordic city's waterfront, creating pedestrian and cycle-friendly zones that are used year round.

Henning Larsen Architects' plans will see the creation of 750 new homes, as well as a hotel, leisure and office spaces along the bank of the River Lagan, which runs through the city on its route from the Slieve Croob mountain in County Down to Belfast Lough.

There are also plans for a new pedestrian and cycle bridge to link the banks of the river, as well as additional leisure and shopping facilities.

"From Copenhagen, we know that harbours have an enormous potential to activate public life in a city. We are going to create the framework for people to feel part of a shared public life by [the] River Lagan making it attractive to stay in the city," he continued.

"[The] River Lagan will no longer create a barrier in Belfast but is going to connect it instead."

The firm also drew inspiration from Northern Ireland's most popular tourist destination, the Giant's Causeway, for the design of the development, which sees buildings step up and away from the water.

Not only will the tiered form of the buildings ensure views down to the river, but it is also designed to shelter the waterfront from the wind in a bid to make the area usable for a larger portion of the year.

Henning Larsen Architects has calculated that by reducing the wind speed along the waterfront, outdoor areas could remain comfortably in use for us to 25 weeks of the year – in contrast to the 9 weeks the city's inclement weather typically permits.

"Analysing the thermal microclimate we applied an effective scale-gradient strategy to the project. By placing the tallest office buildings along the north, facing the railway, we will create a noise blocking acoustic barrier," explained Kurek.

"The lower buildings facing south keep the riverfront pedestrian friendly and human-scaled. At the same time, this strategy allows us to ensure river views and good daylight conditions from all buildings."

Terraced landscaping down to the river will echo the design of the buildings, while the use of stone and geometric patterns will provide a further reference to the honeycomb formation of the basalt stone stacks of the Giant's Causeway.

A number of architectural projects have attempted to revitalise the banks of the River Lagan in recent years, with varying degrees of success.

In the mid to late 90s, the Waterfront concert hall and Odyssey sports and entertainment complex provided two of city's first purpose-built events spaces, and in 2012, the Titanic Belfast museum was opened in homage to the ill-fated ship the city has become famous for producing.

The vessel was one of the thousands made in Belfast docks, which sit at the mouth of the River Lagan near the Titanic museum and proposed Belfast Waterside masterplan.

The redevelopment of the industrial area formerly occupied by the Sirocco Engineering Works is part of the Lagan Corridor Project, which aims to repopulate the docks.

Vanguard Real Estate, which is overseeing the development, expects work to begin in summer 2018 and complete by summer 2022. 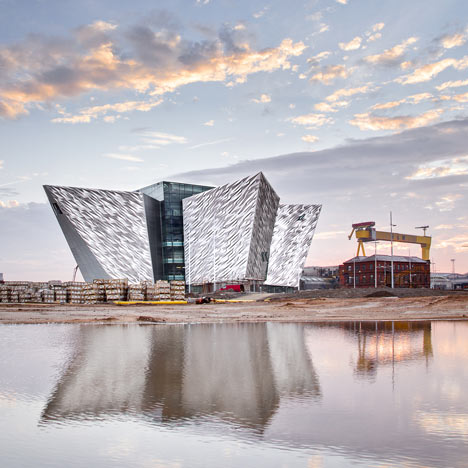