A vivid orange stairwell and a canted glass facade are among the modifications that US studio Fougeron Architecture has made to a century-old house in San Francisco.

Encompassing 2,500 square feet (232 square metres), the Cut Out House is situated in Noe Valley, an affluent neighbourhood of the city.

The project entailed the complete remodel of a Victorian home built over a century ago and left untouched since the 1920s.

The dwelling occupies a slender parcel that measures 65 by 25 feet (20 by eight metres) and is attached to its next-door neighbours.

"In this exceptionally narrow lot, solar orientation and natural light diffusion were paramount for making sure the home felt warm and open," said Fougeron Architecture, a San Francisco studio that was founded in 1985 by architect Anne Fougeron.

While the street-facing elevation was preserved, the architects re-imagined the back facade. A two-storey wall tilts outward at nine degrees, which maximises the floor area within. A portion of the third floor also angles outward, but in the opposite direction.

The interior of the three-storey dwelling was completely reconfigured. The team "reversed the original flow" by moving the main public area to the ground level, where it connects to a rear garden.

"Large sliding doors opens the living room, dining room and kitchen to the outdoor space," the studio said. "A limestone floor, and a blue fence and cabinets, blur the line between inside and outside."

A kid's room and a study are placed on the second floor, while the master suite and a guest room are situated on the top storey. Windows and a deck are oriented in a way that provides views of the San Francisco Hills in the distance.

Various cuts were made in the floor slabs, resulting in a series of voids that usher in natural light.

"Each floor is placed between three slots so that the home connects vertically rather than horizontally," the team said. "Traditional Victorian homes often are poorly lit and are disconnected from floor to floor, but by suspending floors, there is brightness and fluidity throughout."

A bright orange staircase was placed in one void and serves as an organising element within the home. A perforated metal rail folds in and out, recalling the shape of the back facade.

In the rear of the dwelling, voids are accented with surfaces "painted various shades of blue, from light to dark, emphasising the progression from top to bottom".

The home incorporates a number of sustainable strategies, including natural ventilation, no air conditioning, low-flow fixtures and a charging station for an electric vehicle. The dwelling also features a hydronic heating system that is incorporated into stone and wood floors.

Fougeron Architecture has completed several projects in its home state of California, including an urban condo building that is clad in dark wooden dowels, and a house that steps down a cliffside and projects over the edge. 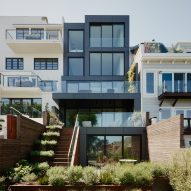