Dutch architect Ben van Berkel of UNStudio has launched UNSense, a startup that will develop technologies to make buildings healthier and cities smarter.

The new company will explore ways to help the architecture and construction industries catch up with tech developments in other sectors.

"We are living in the age of the iPhone, yet the architecture and construction industries are still in the Walkman phase," said UNStudio co-founder Van Berkel.

"If you look at the latest Tesla for instance, it has maybe a few hundred sensors in it," he told Dezeen. "But an average building has maybe three sensors."

Architecture "needs to catch up"

UNSense will operate separately from UNStudio, with a distinct funding structure. It is located in a separate building, at the Freedom Lab Campus tech hub in Amsterdam.

The company will employ data scientists and programmers and collaborate with professions including neuroscientists, sociologists and economists to explore how technology can improve interiors, buildings and cities.

"The digital revolution is driving change in every part of our lives, except within the built environment," reads the press release for UNSense. "The time has now come to catch up."

Van Berkel told Dezeen the startup will particularly focus on making buildings healthier for users. "Here in the west we spend 70 per cent of our lives indoors," he said. "Most of the time the interior environment is very unhealthy. It's fashionable to call it wellbeing but I like to call it health." 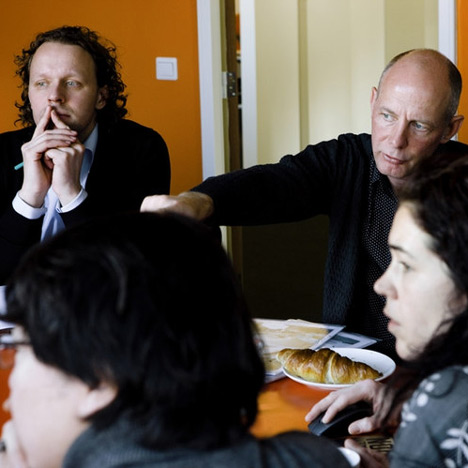 Van Berkel said that sensors could be used to better regulate air flow in buildings, removing bacteria and pollutants more effectively. If used in offices and schools, this could dramatically reduce absences.

"If you look at the quality of air in schools, I get quite angry about how bad the environmental conditions are," he said, adding that architects today had lost interest in creating healthy buildings.

Following the lead of the early modernists

"The modernists were interested in health," he said. "Aalto with his sanatorium, but also Le Corbusier, Hertzberger, the Smithsons. But they did not have the data. In architecture there is not so much discussion about sensorial adaptive design. It is not really been picked up by architects lately. That's what I want to do."

UNSense will also pioneer technologies to make cities more sustainable. "We need to do a lot to protect our earth," said Van Berkel. "We're trying to make our buildings energy neutral."

In a move that foreshadowed the launch of UNSense, the firm last year showcased its Reset stress-reduction pods, which could be deployed in workplaces to help stressed employees. UNStudio developed the pods after learning that stress-related illness costs the US economy $300 billion (£216 billion) a year.

Van Berkel predicted that in future, all architecture firms would embrace technology. He said: "I am of the firm belief that in the future all architecture practices will become arch tech firms, but for now we have to pave the way to make this expansion of our knowledge and expertise possible."

UNStudio was founded in 1988 by Van Berkel and Caroline Bos. It was placed at number 313 in the 2017 Dezeen Hot List of the world's most newsworthy forces in design.

Recent designs unveiled by the firm include a 300-metre skyscraper in Dubai with the "world's tallest ceramic facade" and a cable-car system for Gothenburg.

Main image of Ben van Berkel is by Els Zweerink.