French fashion designer Hubert de Givenchy, known for dressing icons including Audrey Hepburn and Jackie Kennedy, has passed away at the age of 91.

The news of Givenchy's death was confirmed yesterday by his partner, couture designer Philippe Venet.

In a statement released to the Agence France-Presse, he said the designer had died in his sleep on Saturday, 10 March 2018.

Givenchy's eponymous fashion house, which he founded in 1952, later released a statement – describing the designer as a "gentleman who symbolised Parisian chic".

"His enduring influence and his approach to style reverberate to this day: with his first couture collection, in 1952, he championed the concept of separates," it read. "His work remains as relevant today as it was then. He will be greatly missed."

The House of Givenchy is sad to report the passing of its founder Hubert de Givenchy, a major personality of the world of French Haute Couture and a gentleman who symbolized Parisian chic and elegance for more than half a century. He will be greatly missed. pic.twitter.com/xapm0zSwDy

His fashion career began in 1944, when at the age of 17 he began training under Parisian designer Jacques Fath.

He then moved on to design for other major fashion houses such as Elsa Schiaparelli and Lucien Lelong – where he worked alongside then-unknown Pierre Balmain and Christian Dior.

He founded his own fashion house in 1952 and presented his first collection in February that year, which included the iconic Bettina cotton blouse named model Bettina Graziani.

As well as his own couture lines, Givenchy was also known for creating the so-called "little black dress" worn by actor Audrey Hepburn in the 1961 film Breakfast at Tiffany's.

The pair went on to collaborate for over 40 years, with De Givenchy also creating her outfits for musical Funny Face in 1957 and movie How to Steal a Million in 1966. 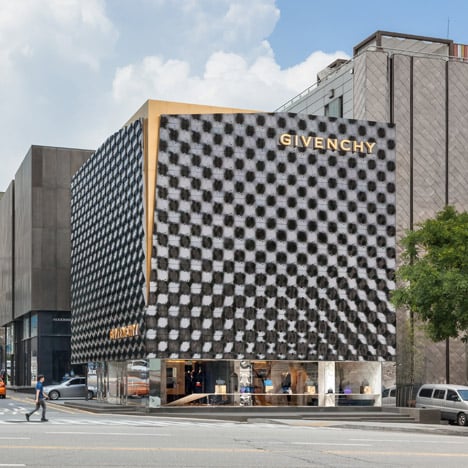 Givenchy store in Seoul has an undulating moulded-metal facade

"He revolutionised international fashion with the timelessly stylish looks he created for Audrey Hepburn, his great friend and muse for over 40 years," said a spokesperson from his fashion house.

Givenchy left his own company in 1995. A slew of young British designers took to the helm of the company, including John Galliano, Alexander McQueen and Julien MacDonald.

From 2005 to 2017, designer Riccardo Tisci was put in charge of the company's artistic direction. Tisci was largely credited with bringing Givenchy up-to-date but announced his departure from the company in 2017.