Our latest Dezeen x MINI Living video features a proposal by Malka Architecture to improve the energy efficiency of a Parisian apartment building, by attaching boxy, parasitic extensions to its exterior.

Titled Plug-in City 75, the proposal would see parasitic cubes mounted onto the facade of a building in the 16th arrondissement of Paris, extending the floor plates of the existing apartments horizontally.

As well as adding space to the homes within, the extensions would also form a seal around the energy-inefficient 1970s building to better insulate it, lowering its energy consumption.

Paris-based Malka Architecture came up from the proposal because the city's building regulations prevented them from demolishing the strcuture. The architects claim that the extensions could reduce the structure's energy consumption to a quarter of what it is now.

The boxes would be fabricated off-site using a responsibly sourced wood, before being "plugged" into the building's exterior. Each modular box would respond to the requirements of each occupant, and could be tailored to their particular needs. 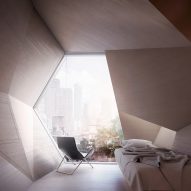 Each modular box would not only add an enclosed extension to one apartment, it would also offer the residents of the apartment above an open terrace. The newly extended facade would also create an opportunity to drape the building in hanging greenery.

The architects envision that mounting extensions onto the building in this way would create both private and public spaces that residents could use.