Led by interior designer Nicole Hollis, the team transformed a 5,000-square-foot (464-square-metre) space to create its offices inside a former industrial building at 1000 Brannan Street.

A monochrome palette based on white-painted walls and poured concrete flooring runs throughout the space, forming a blank backdrop for designs in the main workspace.

"We desired a 'white canvas' where we could clear our minds of daily clutter and focus on a creating a new concept for each and every design project," said a statement from the studio.

"It is important to keep the studio uplifting and inspiring," the statement continued. "We often have furniture designers, artists and fabricators drop off materials and furnishings to place around the studio for inspiration – it's always rotating."

Several existing walls were stripped out to create an open-plan workspace. The reconfiguration also allows plenty of natural light to flood in from the existing industrial-style, steel-framed windows and opens up views to the surrounding city.

Custom white desks are arranged in rows and topped with Fontana Arte Dome pendant lights. "With its natural light and minimalist sensibility, the studio acts as a laboratory where we can experiment," the studio continued.

Instead of walls, the team inserted a pair volumes to separate the studio into two areas and house materials for drawing and model making. These cubes are covered in horizontal wooden boards that are charred black using the Japanese technique known as shou sugi ban. 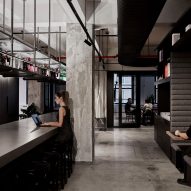 The process is more commonly employed to preserve exterior cladding, but offers a contrast to the pared-back surroundings in this interior.

Hollis also designed the "brass-clad box" as a reference to the work of minimalist American artist Donald Judd. It sits in front of the blackened volumes and forms a reception desk.

The team chose a darker colour scheme and homely furnishing to decorate its kitchen, dining and lounge area, where employees are encouraged to relax and socialise.

A bleach stain runs along the top of the metal splash back, placed on the back wall of the nearly all-black kitchen. Dark cabinets are located beneath a counter of coal-coloured stone and inky gloss tiles. Hand soap bottles and plates are also black to match the decor.

The custom-made black metal island is topped with white calacatta marble to add a point of contrast. Employees can eat and chat around the island, or at a black dining table. A wall lamp featuring moveable arms that resemble spider's legs, designed by Milan-based Dimore Studio, illuminates the social area.

"The dining table is large to have lunch family style, which allows employees to gather at lunchtime or have informal design meetings," said the studio.

At the entrance to the studio, the team's informal meeting room is covered with textural dark plaster and features a marble fireplace. A pendant light designed by New York-based Bec Brittain hangs above a black sofa and a mid-century-style wooden chair. Other decorations include planting over the central metallic table and a candle set on a small side table.

Homely stylings are also found in a series of meeting rooms, where pictures with black and white frames hang in a collage. Sliding glass doors to these rooms are fitted with gridded black frames that mimic the design of the existing windows.

Nicole Hollis joins a number of creative studios who have similarly designed their own workplaces. Among recently completed examples are architecture firm Woods Bagot's Downtown Manhattan offices and Studio11's colourful and texture workspace in Minsk.