Nike has colour-matched Brazil's new World Cup football strip with the kits worn by the team that won the tournament back in 1970.

According to Nike, Brazil's home shirts for the FIFA World Cup 2018 will be yellow as always, but the shade is going to be "a more vibrant samba gold" than has been seen for over two decades.

The exact hue was selected following a visit to the Football Museum in São Paulo. Nike's team took with them a colour swatch book, and used it find a match for the shirts worn by Brazil's national team in Mexico in 1970 – the first year the games were broadcast in colour.

It was also the year that the national team won the cup for a third time, making it a memorable tournament for fans.

"The bright, vivid yellow of the Brazilians, combined with their style of play, really made an impact on viewers around the world," explained Pete Hoppins, who is senior design director of Nike football apparel.

"It's one of the most iconic moments in the history of football, and we wanted to channel that energy into the 2018 national team collection," he said.

These vibrant yellow shirts are otherwise very simple in design. They feature green rims around the neck, which match the colour of the Nike swoosh logo and player numbers. 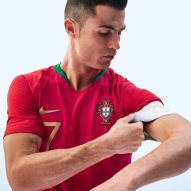 There is also a small detail on the inside neck – the globe from the country's national flag, surrounded by radiating lines.

The shirts are worn with bright blue shorts, in another reference to the Brazilian flag.

For the away strip, the yellow shirts are swapped for blue ones, although the yellow tone still appears in the details. These shirts feature a tessellating star pattern, in tribute to the first time the team won in blue, against Sweden in 1958.

According to Hoppins, the overall aim was to capture the bold spirit of the Brazilian culture and its influence on the style of play.

"Being Brazilian is about rhythm, a certain type of movement," added Hoppins. "You see it in the dance, you see it in the art and you certainly see it on the football pitch. Only Brazilians play this way."

The kits are produced in Nike's Vaporknit fabric – a mesh-like material designed to allow optimum ventilation and aerodynamics. The collection also includes training apparel, pre-match clothing and a jacket.

The FIFA World Cup 2018 is taking place in Russia. Kicking off in June, it will see 32 national football teams compete for the trophy.

The majority of teams have now revealed their strips, with many being designed by Nike or its rival Adidas.

Nike, which ranked at which ranked at 37 on Dezeen Hot List 2017, designed the strips for the Nigeria and England teams, which combine designs from old strips with elements inspired by youth culture.

It also created a red, white and blue design for France, and a Portugal kit featuring "celebratory splashes of gold".