The blue passports that will be given to UK citizens after Brexit will be made by a French-Dutch firm, it has been revealed.

In an interview on BBC Four's Today Programme, the head of the company that currently manufactures the UK's passports revealed that the new £490 million contract had been won by Gemalto, a company based in France and the Netherlands.

Martin Sutherland, whose company De La Rue has been designing and producing the British passports since 2009, described the news as "disappointing and surprising".

Sutherland claimed that Gemalto's success was down to an "undercut on price". He said that De La Rue will appeal the government's decision, because he doesn't feel it supports British businesses in the post-Brexit economy.

"We will appeal this decision. It doesn't feel sensible for the British taxpayer," he said. "The British government should be supporting British business in the post-Brexit world, and this decision doesn't do that. "

The UK government launched an EU tendering portal in April 2017, to find candidates for the design of the first British passport post-Brexit. Reports later emerged that a non-UK European company could win the bid.

Sutherland said this has been confirmed to him by the Home Office, although they are yet to release an official statement revealing the winner.

He has now challenged UK prime minister Theresa May and home secretary Amber Rudd to explain the decision.

"I'd like to ask Theresa May or Amber Rudd to come to my factory and explain to our dedicated workforce why this is a sensible decision to offshore the manufacture of a British icon."

The decision has now sparked fears that jobs at De La Rue's Gateshead plant could be under threat. Sutherland said he can't guarantee that cuts won't be made.

In the wake of the EU referendum, Dezeen launched its own ideas competition to design Britiain's post-Brexit passport.

The winning design, by Scottish graphic designer Ian Macfarlane, featured a cover that transitions between the burgundy of the current UK passport and the dark blue of the old, pre-EU British passport. 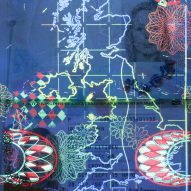