Original features of a historic building in Downtown Detroit, like travertine floors and plaster ceiling details, were preserved during its conversion into a hotel.

The Siren Hotel is opening this month, March 2018, inside the Wurlitzer building – designed by local architect Robert Finn in 1926 and located just off the city's Grand Circus.

The former office building, which was also once home to one of the largest music stores in the world, has been overhauled by design development firm ASH NYC with the help of Quinn Evans Architects.

It joins a roster of regeneration projects in the city, which saw a rapid urban decline during the second half of the 20th century after the motor industry left, but is now experiencing a revival.

"The name, The Siren, is inspired by the Greek mythological creature and acts as a metaphor – calling people back to the city of Detroit," said a statement from the hotel team.

The character of the Wurlitzer has been kept as much as possible but updated with pastel colours and rich materials.

"Inspired by the old-world hotels traditionally found in the Motor City, The Siren Hotel has been re-interpreted in a contemporary way," the team said.

A mid-green hue is used across panelling in the reception area and Populace coffee bar in the lobby.

In the bedrooms, off-white walls soft pink and navy blue upholstery. Custom woven blankets on the beds were designed by graduate students from the nearby Cranbrook Academy of Art. 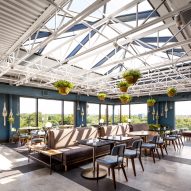 Speckled terrazzo with base colours of red, green or blue is used for tiling in the showers, across the floors and basins.

Counters, tables and stool made from oxblood-coloured marble feature throughout the building.

The Siren is ASH NYC's second hotel, following The Dean in Providence, Rhode Island, which opened in April 2014. The company also has plans to redevelop a church, rectory, convent, and school buildings in New Orleans into boutique accommodation.

Photography is by Christian Harder.