Rogers Stirk Harbour + Partners has released the first visualisations of The HUB, a skyscraper that will "hover" above a historic building in Toronto, Canada.

Renders show an external steel structure supporting the building and allowing it to cantilever over the Toronto Harbour Commission Building, a six storey building erected on the site in 1917.

"Our design brings together many key elements of our work, including structural steelwork, transparency, and connectivity to the urban fabric around it, to form an office in harmony with its surroundings," said Graham Stirk, senior partner at Rogers Stirk Harbour + Partners.

"We are excited to have this opportunity to design a landmark building for Toronto’s skyline," continued Stirk.

Renzo Piano have also unveiled imagery of their inaugural Toronto project,  a courthouse raised on columns featuring a 20-metre-high atrium. 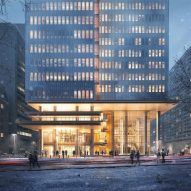 The British architecture firm was announced as the design competition winners for The HUB, also known as 30 Harbour Bay, in 2017. Built for Oxford Properties the skyscraper will contain 1.4 million square feet of column-free office space.

The HUB acronym is a reference to the towers' proximity to the Harbour, Union Station, and Bay Street.

Ranked 99 on the 2017 Dezeen Hot List, Rogers Stirk Harbour + Partners is also working on an art store for the Louvre in northern France, and an extension for the British Library in London.

In an exclusive interview with Dezeen, founder Richard Rogers discussed his pre-fabricated housing project that was meant to solve the UK's problem with housing.