Richard Seifert's celebrated Centre Point tower in London has been restored and converted into apartments by architecture firm Conran and Partners.

London-based Conran and Partners has completely overhauled the Grade-II listed white-concrete high-rise, which was completed by Seifert in 1966, at the intersection of Oxford Street and Tottenham Court Road.

The 36-storey tower previously contained offices, but has now been converted to accommodate 82 apartments, including a penthouse on sale for £55 million.

Developers Almacantar approached Conran and Partners with the commission in 2010. It is now almost complete, with the final stages of the project due to finish by September 2018. MICA, formerly Rick Mather Architects is delivering the adjacent Centre Point buildings and a public plaza.

One of Centre Point's most iconic features is its concrete honeycomb facade, made using crushed Portland Stone concrete.

Structural engineering firm Pell Frischmann, which pioneered the technique of building with precast concrete components manufactured off site when the tower was first built, returned to collaborate with Conran and Partners on the restoration.

They cleaned and restored the facade to its original white – a process that was "surprisingly gentle", thanks to the exoskeleton’s shape being well designed to cope with the rainy English climate; it didn't streak and disclour like many of its contemporaries.

"[Centre Point] stands outside most brutalist architecture. Seifert didn’t fall into the trap that people, other than architects, would enjoy grey and concrete. It’s one of his most sensitive buildings," senior partner at Conran and Partners Tim Bowder-Ridger told Dezeen.

The glazing was entirely replaced and refitted to bring the building up to modern environmental sustainability standards, with large windows round the whole facade that "invite residents to become a voyeur of the city".

After a debate with heritage body English Heritage about the removal of steel spandrels round the lower half of the exterior, the architects unearthed original sketches of Seifert's to support their case that the original intent had been to glaze the whole facade.

Built in an era when cars were given priority, the building originally featured a ramp into an underground carpark and no useable ground level. The tower cantilevered over the vehicle entrance, with access to the offices via an external staircase. 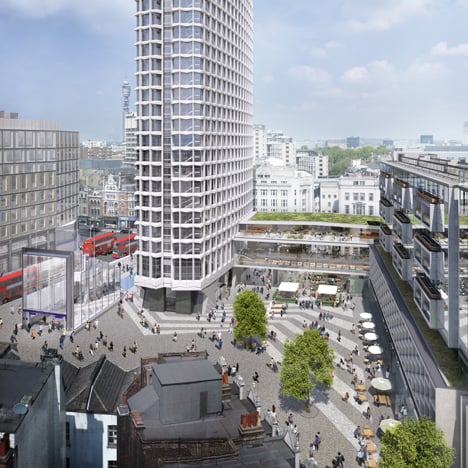 Conran and Partners moved and absorbed the staircase into the building, wrapping a glass envelope around the ground floor to temper the "challenging corners" and create an entrance lobby.

The original outdoor benches are now cast in gleaming white resin and covered in leather cushions. There is also a light installation by artist Cerith Wyn Evans hanging over one of the stairways.

The incorporated staircases lead to a mezzanine level, where the original black and white marble terrazzo flooring has been preserved.

This monochrome palette continues through to the Conran and Partners-designed apartment interiors, where custom-made textures and textiles carry through the honeycomb pattern. Even the tiles of the guest bathrooms use the motif.

The building has an interesting structure, where only four columns support a central spine beam that extends along the full length. This gives it unusually deep and column-free floor plates, measuring 30 metres long and 16 metres wide.

The architects developed six apartment typologies, all designed to make the most of the views. En-suite bathrooms and corridors are clustered towards the centre and realised in dark tones so as not to distract from the centrepiece: windows that run along the length of living areas, bedrooms and, in some instances, bathrooms.

The first floor features a swimming pool, along with a gym, steam room and sauna. The floor above will host a residents club, a catering kitchen, cinema room and spa.

Apartment prices start at £1.8 million for one bedroom, £3.5 million for two, and between £7 and £8.5 million for a three bed. The £55 million penthouse will boast views that look out through the light-up Centre Point sign from the master bedroom.

The development also includes 13 affordable rent homes designed by MICA, located across the plaza in Centre Point House. A requirement from government, these cost a reported £6 million to build, and were sold at a quarter of a million each to the local housing association.

Centre Point was controversial when it was first built, both for its size and original developer Harry Hyams' insistence on a single commercial tenant. But it latest became popular and was awarded Grade-II listed status in the mid 1990s. 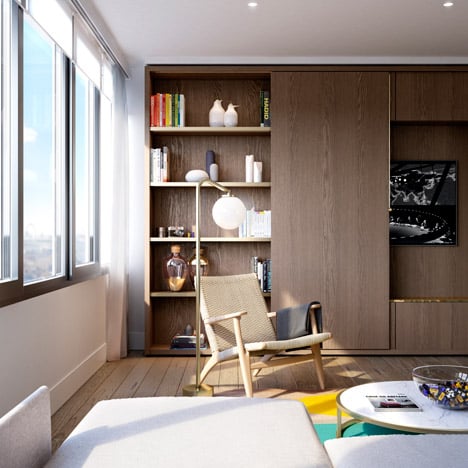 It is the latest of several important listed buildings from this era in London that has been revamped by Conran and Partners, including  the 17-storey Chamberlin, Powell and Bon-designed Black Tower at the Barbican, which was also turned into luxury apartments.

At the base of the tower, the existing entrance to Tottenham Court Road underground station is being expanded to accommodate a ticket hall and platform for Crossrail – a new 26-mile underground railway that will run east-west across London.

There is also a £60 million plan currently underway to pedestrianise Oxford Street, with the western stretch between Oxford Circus and Tottenham Court Road, where Centre Point stands, set to be transformed by the end of 2019.

For job opportunities at Conran and Partners, visit their company profile on Dezeen Jobs.