Athletes at this year's Commonwealth Games will be awarded medals designed by Australian artist Delevene Cockatoo-Collins, which each feature designs based on Queensland's Gold Coast shoreline.

The local artist created both the prize and commemorative medals for the Gold Coast 2018 Commonwealth Games, which kicked off yesterday in Queensland, Australia, and will run until 15 April.

Cockatoo-Collins wanted the medals to represent the importance of the Gold Coast as a place of gathering, meeting and sport for generations of indigenous people.

Each prize medal face features a series of undulating lines formed from oddly shaped ovals, in a bid to emulate the imprints found in the sand caused by the water's movements in low tide.

According to the designer, these coastline patterns are also symbolic of the athletes' achievements.

"The continual change of tide represents the evolution in athletes who are making their mark," she said. "Records are made and special moments of elation are celebrated. 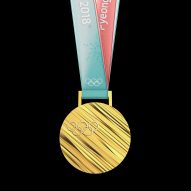 Medals for 2018 Winter Olympics are based on Korean alphabet

"Although the moment in time may be fleeting, it is forever marked within the shells that are brought upon its tidelines."

The ribbon design was informed by a traditional technique, which sees strands of a freshwater reed called yungair woven together. Typically, three reeds would be woven together to form a pattern that resembles linking triangles.

"Individually each reed has little function or purpose, however, when connected together, they are strong and can have many functions, such as carrying babies and food," said the organisers.

"It is a skill that has been passed down and shared through the generations. In Delvene's family, an aunt is the one who passed it down her mother, who then passed the skill on to her," they added.

"This long journey requires dedication, stamina and skill, symbolic of the journey an athlete and coach take to prepare for competition," said the organisers.

"The thrill of this majestic creature playing and breaching displaying its power and grace thrills any spectator lucky to witness such an incredible event. It is representative of athletic achievements which will take place in stadiums, pools, courts, rings, pitches, greens, tracks and along roads."

The artist chose to depict one whale in particular, the Migaloo Yalingbilla.

"Migaloo is a whale that I've drawn for a couple of years now," she said. Back in 2014, my mum told me to take the day off as she heard Migaloo was at Fingal Heads and that he was going to be coming through our way."

"What I saw that day was that Migaloo brought joy to all the people there on the beach waiting for him. So, I thought, he's reaching a broad range of people and my design would be another way of sharing joy," she continued.

The artist, therefore, considers the image of Migaloo on the medal as a way of bringing joy to each athlete who will receive one.

Each of the 1,500 medals will be minted in the Royal Australian Mint's largest coin press, before being individually inspected by hand.

The medals were first revealed at a charity gala in November 2017 and will be presented to all athletes, team officials, technical officials and Commonwealth Games Federation officials.

The Commonwealth Games involve athletes from the Commonwealth of Nations, of which there are 53. This year's games follow on from the Winter Olympics that took place in February and saw Seoul-based industrial designer Sukwoo Lee design the medals for the event.

Set in Pyeongchang – a county in South Korea's Gangwon Province – athletes at the games were awarded with Lee's medals that featured diagonal ridges, formed from extrusions of the country's 600-year-old alphabet.

Philippe Starck's Paris 2024 Olympic medals are designed to be shared

More design and architecture in Queensland