British designer Sebastian Bergne has created a travel-friendly set of objects to be used in Shabbat rituals, including a digitally printed bread cloth and portable glass candle holders.

Bergne's Digital Shabbat was created for the exhibition To Go: New Designs for Jewish Ritual Objects, currently taking place at The Israel Museum in Jerusalem.

Leading designers from multiple faiths were asked to create portable sets of objects for a Jewish holiday or life-cycle event. Other works on show include a portable chuppah, a matzah-making kit and objects for the Havdalah ceremony.

"The intention of the exhibition is interesting as the rituals involved in the pieces are part of people's everyday lives. It seems right that these objects should be designed in a way that reflects contemporary life," Bergne told Dezeen.

"In my particular project, I was interested in linking the historical importance of numbers in Judaism with the importance of digital aspects in today's world, to make an object with historical and contemporary relevance," he continued.

Shabbat, or the Sabbath, is a Jewish day of rest and celebration that occurs on the seventh day of the week. According to Bergne, it is used to remember the Biblical creation of the heavens and earth in six days, and the Exodus of the Hebrews.

Comprised of a digitally printed cloth, a wine glass, candles and glass candle holders, Bergne's Shabbat kit contains the bare essentials needed for the Shabbat, which begins on Friday at sunset. 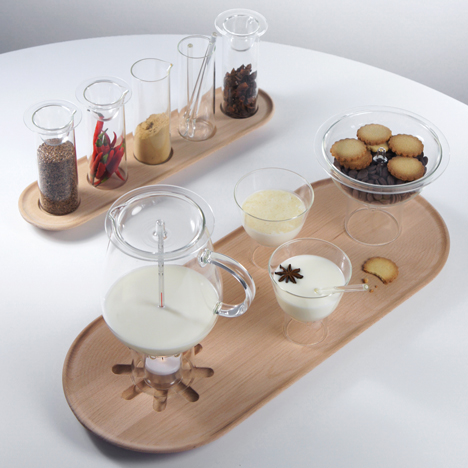 "The Shabbat feast requires certain equipment for its observance, even when one is travelling. These objects present an opportunity to consider both the historical and cultural elements at play in contemporary Shabbat objects," said Bergne.

Made from shock and heat resistant laboratory glass, the two candles and candle holders would be lit just before sunset on Friday evening. The holder also features a place to put the lit match, to allow it to burn out.

The cotton cloth, designed to cover loaves of bread before the festive meal has begun, has been digitally printed with a pattern generated using certain numbers and colours significant to Judaism.

The kit also includes a wine glass, which is traditionally filled to the brim and passed around those at the table after prayers.

These items are stored in a 3D-printed box with a "mysterious" opening, as its joints are hidden in the surface lines.

Designed to protect and contain the items it holds, Bergne said the box was designed with a similar form to an ancient book.

"Reminiscent of an ancient and mysterious book of knowledge, the box features lines corresponding to important numbers in Judaism: as a whole, it is a digital object of our time," explained the designer.

As numbers are believed to carry strong meanings in Judaism, Bergne used the significant numbers of 1, 3, 4, 5, 7, 8, 10, 12 and 72 to determine the proportion, size and pattern of the Digital Shabbat. 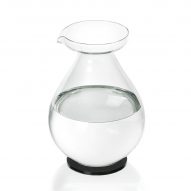 "The careful use of certain proportions and patterns using auspicious numbers found in Judaism imbue the objects with historical meaning despite their minimal appearance."

Previous projects by Bergne, who is based in London, include a "micro laboratory" that enables users to form different beverage flavours, and a jug shaped like an enormous water droplet.