Ahead of the festival's first 2018 weekend, Smith told Dezeen he believes events of this kind allow revellers to see art beyond typical exhibition spaces, and enable artists to reach a wider audience.

"People want to have an experience with art outside of the traditional white gallery spaces," said the artist, who has previously exhibited at Coachella.

"It's not just festivals, it's a desire to create work that's outside the traditional spaces, and come with more challenges and restrictions."

In parallel with the rise of photo-sharing platform Instagram, temporary large-scale installations and sculptures have become markers for millennials documenting and sharing their activities and travels.

This trend means that artworks are proliferated to a much wider, global audience quicker than before.

"There's something exciting about the nature of these pieces being temporary – almost like a myth. 'Were you there, did you see it?'" Smith said. "That translates into the selfie discussion. I think selfies at installations are a digital marker to say 'I was there'."

Coachella has become a pinnacle of such events, when almost 100,000 people each day enjoy music and cultural activities across the festivals six days – three over two successive weekends every April.

Smith's contribution to the 2014 edition was a series of cuboids that were mirrored day, but transformed into neon towers at night.

Other artists and designers that have participated in the festival include Ball-Nogues Studio, which installed a sinuous orange and purple pavilion that towered over music fans in 2015, and Héctor Serrano, whose dome of colour-changing balls provided a venue for silent discos in 2013. 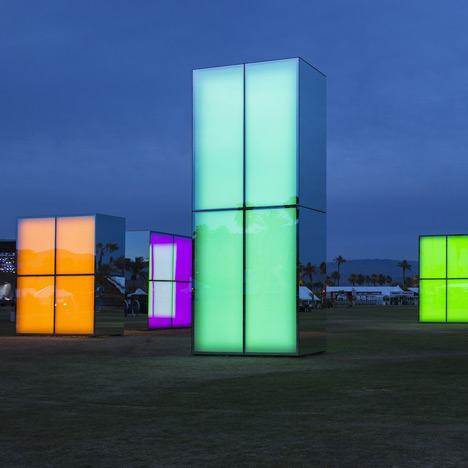 Coachella takes place annually in its namesake valley in the Californian desert, not far from Palm Springs, where Smith grew up.

He now runs his studio there, and has used the expansive arid landscape as the backdrop for several of his mirror installations – including a cabin wrapped in reflective bands to make it partially disappear.

Smith's interview with Dezeen took place in the run up to the debut of his installation for fashion brand COS, commissioned for this year's Milan design week.

The piece, titled Open Sky, will comprise a series of faceted mirrors that will reflect their surroundings in a 16th-century courtyard, as well as the sky above.

Instagram has also become a key tool during Milan design week – the largest event in the world of its kind – for visitors wanting to share their favourite installations, and those who can't attend to follow along.

Similarly to the desert, the Italian city's grand palazzos and opulent architecture provide a photogenic setting for temporary artworks and installations created by designers and brands.

Photography is by Lance Gerber, unless stated otherwise.