A new bedroom wing and an opened-up entertaining area are among the modifications that US studio Joel Sanders Architect has made to a 1950s house in New England.

The New Canaan Residence, which takes its name from the Connecticut town where it is located, sits on a leafy property encompassing just under three acres (1.2 hectares). The project entailed renovating a low-lying, 1957 home designed by architect John Black Lee, along with creating a wing for a master suite and garage. The clients were "empty nesters" who wanted more space, particularly to accommodate visits from their grown children.

The design team was tasked with obeying strict zoning requirements while also devising a scheme that honoured the integrity of the original design. In response, they created a single-storey extension that neatly lines up with the existing 3,100-square-foot (288-square-metre) building.

The team reconfigured the front of the property, replacing a circular driveway with a rectangular entry court. A "porous fence" made of Corten steel slats offers views to a formal, symmetrical garden.

Encompassing 2,600 square feet (242 square metres), the new wing has exterior walls made of glass and bluestone. The elevation overlooking the parking court is defined by a long stone wall that blocks views into the master bedroom. A portion of the roof is lifted up and lined with clerestories, bringing soft natural light down into the bedroom.

The interior of the existing home was significantly reconfigured. The entertaining zone sits at the centre of the dwelling, while the master suite occupies one end and a series of bedrooms are situated on the opposing side.

"Typical of midcentury homes, the original home arranged three small bedrooms around one shared bath and treated the kitchen as a small, enclosed food preparation area," the studio explained.

"The renovation expands the modest footprint of the existing home to accommodate a new open kitchen/family room and new master bedroom suite, without compromising the proportions of the original one-storey house." 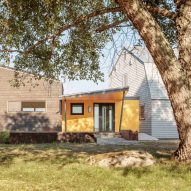 The interior of the home is meant to feel open and fluid. To create demarcations between distinct areas, the team inserted three freestanding service cores that are sheathed in wood.

"The cores are set back from the perimeter window walls, defining parallel circulation corridors that allow uninterrupted views from one end of the house to the other," the studio said.

Ample glazing provides a strong connection to the landscape. South-facing, sliding glass doors offer views of a verdant lawn, which "slopes down to wetland grasses framed against a backdrop of tall trees".

The overhaul of this Connecticut home is one of many recent projects involving midcentury modern dwellings. Others include the sensitive renovation of a 1957 Seattle residence by SHED, and the refurbishment of a 1950s dwelling in Indiana by Haus. Also in Indiana, new owners of a 1960s prefabricated home have carefully preserved the dwelling, even keeping its furniture and appliances in place.