Milan is becoming a major cultural destination that could attract creative businesses away from London, according to leading figures in the city for its design week.

"Brexit is an opportunity for Milan," she said, speaking during Milan design week, the world's most important design festival, which is underway in the city this week.

"Businesses are coming here," she told Dezeen. "Milan used to feel like just another European city but now it's a world city. It will benefit from Brexit,as Italian people who left the city to start businesses in London return."

Vollenberg heads Utrecht-based Organisation in Design, but has been curating shows in Milan since the launch of the Ventura Lambrate design district in 2010. She said the city has recovered from years of decline and is now full of confidence.

She cited the Expo held in the city in 2015 and the new high-rise Porta Nuova district to the north of the city centre as two key reasons for the transformation.

"The Expo was a huge confidence boost for Milan and the Porta Nuova district makes the city feel more international," she said. "Together they have helped changed the perception of the city."

Vollenberg, who lived in Milan from 2000 to 2005, said that people in the city were now more open to foreigners than before and that English was regularly spoken by inhabitants, in contrast to the time when she lived here when people only spoke Italian.

She added: "There is now money in the city for investment and to support people with ideas. Things are happening. And the city is a much more pleasant place to live since they made so many improvements."

Other key design-world figures in the city for Milan design week agreed.

"The Expo, which wasn't very exciting culturally, was the catalyst for all of this," said critic and writer Alice Rawsthorn. "I think it brought a new energy to Milan, and new investment from new areas that developed, and all that development accelerated. I think it has had a great legacy for the city, building on all the great restaurants, the lovely old shops, the gardens and so on."

Rawsthorn added that the opening of new cultural buildings in the city had made a difference.

"Fondazione Prada has made a huge impact" she said, referring to the OMA-designed cultural centre that opened in 2015. "Every time you go it's full of people. The quality of the exhibitions is amazing."

Rawsthorn also referenced the vast Pirelli HangarBicocca art centre housed in a giant former factory where trains were fabricated, and Fondazione Nicola Trussardi, a cultural venue that, like Fondazione Prada, has been opened in the city by a fashion house.

"Pirelli HangarBicocca, at the opposite end of the city, has an incredible programme," she said. "And Fondazione Nicola Trussadi for years now has done peripatetic projects in different parts of the city."

Milan is capital of the northern Italian region of Lombardy with a population of around 1.4 million. It is home to the third largest metropolitan economy in Europe after London and Paris, and the Italian stock exchange. And it is considered the capital of global design and fashion, with a high concentration of leading brands in both sectors based in or near the city.

Yet it suffered in the aftermath of the 2008 financial crisis, which hit the city's key banking sector. It also saw its prestigious fashion and design industries threatened by the rise of the far east as a manufacturing base.

In addition, the former industrial city fell behind rival cities in terms of its environmental quality, suffering from gridlocked traffic and air pollution. For years, it lacked the political will and coordination to adapt. In a controversial 2013 interview with Dezeen, Patrizia Moroso of furniture brand Moroso accused the city of "sitting in the past".

"I don't see energy now," Moroso said at the time. "The city is like a closed box."

However in recent years Milan has bounced back. It has invested heavily in its infrastructure, with major pedestrianisation schemes, new parks and cycle-hire projects among initiatives that have transformed Italy's second-largest city.

Milan is now a "fantastic place"

Italian design duo Formafantasma, who are based in Amsterdam, agreed that the city is unrecognisable today.

"A few years ago Milan was a disaster, much like other cities in Italy," said Formafantasma's Andrea Trimarchi, adding that like many young Italian designers, Formafantasma felt obliged to move abroad for education and work.

"We have a feeling that more people are considering Milan now, for different reasons," said the studio's Simone Farresin. "I think it is because the city improved a lot. Culturally it's quite interesting in this moment. Of course thanks to Brexit, other cities have become more interesting that London." 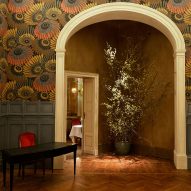 "Milan has absolutely got its shit together this year," said the American-born designer, referring to the events taking place during design week. "It's amazing, you can feel it everywhere. I go by bike everywhere so I'm all over the city, and you can see so many new things in so many new neighbourhoods."

"With the Salone del Mobile, it gets more and more interesting," he added. "It's a complete design capital."

"The city is changing for the better. Milan is a fantastic place and it's not huge so it's accessible. It's small enough to feel like home, but it offers a lot of contemporary architecture, art and exhibitions. The quality of life is amazing here."