Neri Oxman and her Mediated Matter Group at MIT have expanded their collection of 3D-printed death masks with designs that cultivate new life after death.

The third and final collection in the Vespers series of death masks sees the Mediated Matter Group explore the concept of rebirth, with a collection of five, almost colourless 3D-printed masks that function as "biological urns".

The urns are inhabited by living microorganisms that have been synthetically engineered by Oxman's team to produce pigments and/or useful chemical substances for human augmentation, such as vitamins, antibodies or antimicrobial drugs.

The team said that the research is leading toward a future where wearable interfaces and building skins are customised not only to fit a particular shape, but also a specific material, chemical and even genetic make-up.

Oxman, an American-Israeli designer and professor, leads the Mediated Matter Group as part of the MIT Media Lab.

Their previous 3D-printing research projects include 3D-printed "wearable skins" designed to facilitate synthetic biological processes, and investigations into how to use silkworms to print architectural structures. 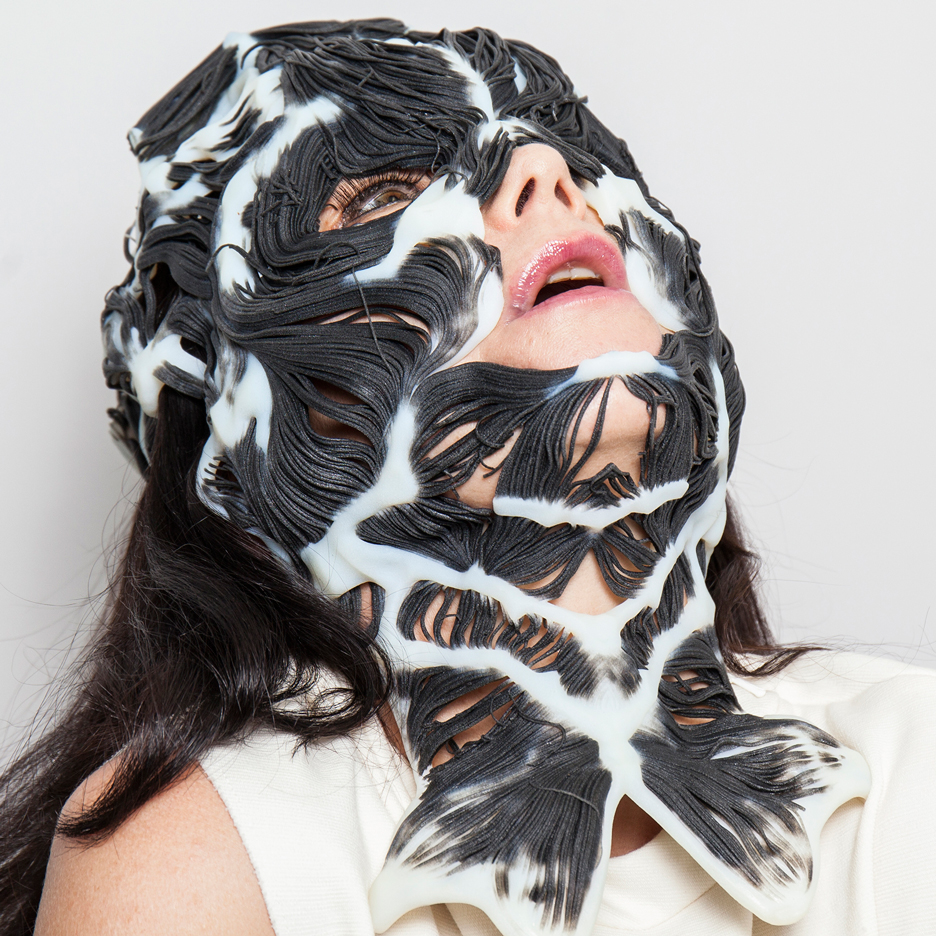 She first unveiled the Vespers collection in 2016, revealing the second part of the trilogy first, then following up with the first part.

Based on ancient death masks that were traditionally made from wax or plaster, Oxman's versions are formed using a Stratasys Objet500 Connex3 multi-material 3D printer, which constructs 3D forms by depositing polymer droplets in layers.

By using custom software, Oxman and her team at MIT are able to model high-resolution and complex shapes based on data. Each series comprises five masks that explore a different concept: past, present and future.

Combined, the 15 masks represent the transition from death to life, or from life to death.

In Series I, called Past, The Natural World, the mask's 3D-printed structure encompasses colourful swirling patterns made using minerals that have been informed by the physical flow of air emitted from the martyrs' last breath.

In Series II, named Present, The Digital World, the masks convey the notion of metamorphosis. The shapes and colours of the five masks in the first series informed the designs of this second set.

"Using spatial mapping algorithms, the culturally coded surface colorations and truncated geometries in the first series are transformed into colored, internal strands within transparent, smoothly curved volumes in the second," explained the team.

"For example, the distribution of colors across the ‘crown of thorns’ mask in the first series becomes internal nerve axons in its martyr’s mask in the second series."

For the newly-unveiled Series III, called: Future, The Biological World, Oxman explores the concept of rebirth. These almost colourless masks function as habitats for living microorganisms.

Once again, the masks feature patterns derived from the previous series, while the microorganisms that inhabit the mask reinterpret the colour palette of the first series.

Using 3D printable bioactive materials, the Mediated Matter Group has been able to synthetically engineer the microorganisms to produce specific pigments and/or useful chemical substances for human augmentation, such as vitamins, antibodies or antimicrobial drugs.

"Devoid of cultural expressions and initially nearly colourless, these masks are paradoxically the most 'alive' of the three series," said the MIT team. "They literally 're-engineer' life by guiding living microorganisms through minuscule spatial features within the artefacts of the dead. Their microorganisms are distributed according to the spatial logic provided by the second series."

"The project points towards an imminent future where wearable interfaces and building skins are customised not only to fit a particular shape, but also a specific material, chemical and even genetic make-up, tailoring the wearable to both the body and the environment which it inhabits," they continued.

"Imagine, for example, a wearable interface designed to guide ad-hoc antibiotic formation customised to fit the genetic makeup of its user; or, consider smart packaging or surface coatings devices that can detect contamination; finally, consider environmentally responsive architectural skins that can respond to, and adapt – in real time – to environmental cues."

The team concluded: "Research at the core of this project offers a new design space for biological augmentation across a wide breadth of application domains, leveraging resolution and scale."

The release of the group's final collection of Vespers is in conjunction with Paola Antonelli's &Design exhibition for the Tribeca Film Festival, which will see Antonelli and Sibling Rivalry partner/creative director Mikon van Gastel create a virtual reality experience rooted in universal themes including death, love, play and the idea of self.

The Vespers death masks were created for The New Ancient Collection by 3D printer manufacturer Stratasys, which is being curated by Naomi Kaempfer.