A skyscraper by architecture firm Adrian Smith + Gordon Gill is set to rise next to Chicago's historic Tribune Tower and become the second-tallest building in the city.

The tower will soar to 1,422 feet (433 metres) tall – just short of the city's Willis Tower, formerly the Sears Tower, which was completed by Skidmore Owings & Merrill in 1973.

Architect Gordon Gill from local firm Adrian Smith + Gordon Gill Architecture has designed the new skyscraper as part of a larger scheme that includes an overhaul of the neighbouring Tribune Tower and its surrounding buildings.

The mixed-use tower is slated for a site east of the 1920s neo-gothic tower, currently a parking lot, and will rise 96 storeys.

Its glazed form will become smaller at its top, with its north and south elevation facades gently curving inwards to create a crown.

Commercial spaces and parking will occupy its lower levels, with a hotel above. Further up still will be 439 rental apartments, then 125 condominiums at the top.

The east and west sides will have vertical bronze-coloured metal fins designed to play off the Tribune Tower's historic exterior. The project aims to "engage in a harmonious dialogue" with the building, said a statement from the local developer Golub & Co, which is working with LA-based CIM Group on the project.

Meanwhile, the Tribune Tower is being transformed from offices into 163 residences. Steve Hubbard from Chicago-based Solomon Cordwell Buenz is leading the project, with Phil Hamp from local firm Vinci Hamp Architects acting as the preservation architect. 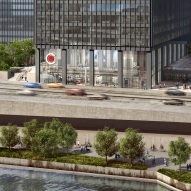 While the landmarked tower will remain largely intact, plans for the surrounding buildings have not yet been released. They include a 1920s printing plant, and WGN Chicago's radio and TV buildings.

Other aspects of the wider redevelopment project include a new courtyard at ground level, a glazed four-story addition on top the television building, a pool enclosure, and a terrace behind the illuminated gothic-style lettering of the Chicago Tribune sign.

Interior demolition has already begun on Tribune Tower, which is set to reopen in 2020. Meanwhile,  the Chicago Tribune's newspaper offices – which previously occupied the building – are planned to move to One Prudential Plaza in June 2018.

The Tribune Tower was the result of a now-famous international architecture competition, which resulted in entries that displayed a wide variety of styles. The competition was recreated for last year's Chicago Architecture Biennial, when contemporary studios were asked to propose alternative visions for the building as giant models.

The firm's founders are responsible for many of the world's tallest skyscrapers. Smith was the project architect for the Burj Khalifa in Dubai, which currently holds the title, when he worked for SOM.

Adrian Smith + Gordon Gill is also behind the Jeddah Tower in Saudi Arabia – set to eventually overtake the Burj Khalifa, now that construction has moved forward after serious delays – and Central Park Tower in New York, due to become the world's tallest residential tower.

Images by Golub and Co, and CIM Group.