Plans for a 150-metre-tall skyscraper in Berlin designed by Frank Gehry have been put on hold due to safety issues with subway stations below the site.

Gehry Partners won a competition in 2014 to design the Hines-Hochhaus tower for international real-estate firm Hines. It was expected to become the tallest building in the German city.

But now Hines is caught in a dispute with the Berliner Verkehrsbetriebe (BVG), the city's main public transport company, over whether the tower will jeopardise the safety of the U-Bahn metro stations that run beneath the site.

Until Hines and the BVG can come to an agreement, the project is on hold indefinitely.

According to the Berlin Kurier, the BVG raised concerns last week that work on the construction site could cause up to 17 subway stations to flood.

In a letter, the head of the BVG Sigrid Evelyn said this catastrophic event would meant the "underground operation would be severely impaired for several years".

Hines managing director Christoph Reschke has hit back, saying: "This is a horror scenario that will not happen because of the security arrangements that we have agreed and negotiated together".

Gehry's proposal is for a twisted block of rotated cuboids, not dissimilar to his New York by Gehry tower in Manhattan. Clad in pale stone, the building is designed to accommodate 300 apartments and a hotel.

Originally the tower was planned for a location slightly further south, but Hines now wants to build over the area where the tunnel of the U5 runs.

This particular line is surrounded by groundwater, which is why the BVG is concerned that construction work for the high-rise residential tower would cause subsidence and water ingress. 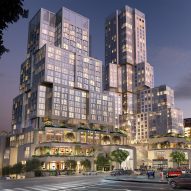 Hines has already said it will build barriers in the construction site to protect the tunnels from groundwater, committing to daily checks and promising to halt construction immediately if a leak is found.

Until an agreement is reached, the Senate Department for Urban Development has put the plans on hold. Either new safety measures will be put in place, or the project will be cancelled.

California-based Frank Gehry is one of the world's best-known architects, and ranked at 61 on Dezeen Hot List 2017.

The architect has had setbacks on several recent proposals. He recently revised a mixed-use development in Los Angeles, after initial proposals were rejected, and refreshed his plans for a residential complex in Santa Monica to include more public space