Archive drawings of bygone creatures feature in The Museum of Extinct Animals, a new range of wall coverings and textiles from Dutch brand Moooi.

Presented for the first time during Milan design week, the collection includes carpets, leathers and fabrics. But the highlight is the series of wallpapers, created in collaboration with Belgian brand Arte.

Moooi found images of these animals by exploring the collections of various museums.

"We searched museums around the world and found the most incredible drawings of bygone animals, documented by explorers on their travels," said Marcel Wanders, co-founder at Moooi. "So much of what has lived is lost and can only live in our memories and imagination."

"For Moooi, the 'Museum of Extinct Animals' became an inspiration. We want to share our excitement, wonder and love, and try humbly, against our better judgement, to hold on to what is lost and celebrate it coming back alive again.

The range includes one wallpaper that features all 10 of the selected creatures, which also include the dwarf rhino, armoured boar, caligraphy bird, flying coral fish, aristo quagga and blooming seadragon.

There is also a design dedicated to each creature, aiming to create the impression of fur, plumage or skin.

Patterns are based on the colour-palette and texture of the animals, as depicted in the drawings. The papers are made from a wide range of materials, including suede, metal foil, paper weave, raw jute and moiré textile.

For some of the designs, the team tried to take into account the folklore surrounding the extinct animals.

For the wallpaper based on the aristo quagga, a creature that resembles a zebra, the pattern is intended to reference the animal's "delicate features and royal appearance". It features a brown gridded texture, with faint black markings. 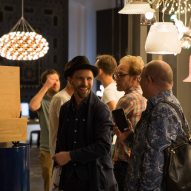 Watch our talk with Maarten Baas at Moooi's Milan exhibition

The armoured boar design is printed on gauze and Japanese paper, to mimic the allegedly shiny coat of the bygone creature, and features yellow and blue accents.

The dodo design is based on the soft plumage of the famously extinct bird. It features a three-dimensional motif that is available in grey, blue, beige or white.

Meanwhile, the paper inspired by the blushing sloth has a grey-brown flock finish to resemble the animal's fur, while the calligraphy bird wall covering is blue with calligraphy swirls.

The Museum of Extinct Animals formed part of Moooi's Milan design week showcase, which was presented from 17 to 22 April 2018.

The brand always unveils a huge new collection in Milan every year. Highlights from previous launches include a ring-shaped rocking chair and an upended sofa. This year's collection features a plant-shaped chandelier and table lamps resembling animals.

Other brands launching collections during the festival include Sanwa, which has unveiled its latest collection of tiny kitchens for micro homes, and Hem, whose new furniture range includes a sofa that can be packed into boxes.