Rather than one vast structure, the series of large white tents provide a new layout for this year's fair, which opened for previews yesterday, 2 May 2018.

Universal Design Studio (UDS) – the architecture and interiors arm of UK design studio Barber and Osgerby – was asked to rethink the venue after completing several for Frieze's London edition.

"Previously there was another iteration by SO-IL, fantastic and beautiful, but it was basically built as one solid structure snaked along the river," UDS associate director Richard McConkey told journalists during a tour of the fair. "But our brief was to make this massive fair feel more intimate."

The studio's response is a set of five adjacent tents lined up in a row, totalling 28,000 square metres. The gabled buildings, supported by repeated steel frames, are arranged perpendicular to one another so transparent or translucent panels in the ends allow light into each space.

"What we were trying to do is to bring areas of natural light into the fair," McConkey said. "As it's an art fair, all of the works are very sensitive, so no direct sunlight can hit an artwork. So the whole fair has been orientated to allow light sections in, with diffused panels in different areas."

The venue is located on Randall's Island, which sits between the Harlem and East Rivers, south of The Bronx.

Its long, narrow site is flanked by the Harlem River to the west, and Ichan Stadium and large sections of transport infrastructure to the east.

Therefore, UDS positioned restaurants and sponsor lounges on the water side so outdoor seating areas could enjoy the best views.

Some of the decks have trees growing up through their floor, as no flora could be removed to accommodate the structure.

Inside, the venue organised into several sections that group booths for similarly sized galleries together. 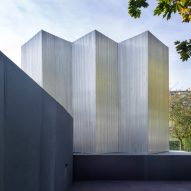 "It's almost like designing a temporary town for art," said McConkey. "The galleries are almost like the marketplace, and different positions have higher value, which supports other galleries."

"[Larger galleries] pay more money to be located on prime intersections, but then what Frieze does is push that these guys subsidise some of the small galleries," he added.

Previously, the fair had entrances at its north and south ends. But UDS moved these to the sides to create a better flow of movement around the exhibitions. The aim was also to create a layout that was navigable, but that allowed visitors to wander and easily discover artworks off the main thoroughfares.

Frieze New York – now in its seventh edition – is also open for previews today, and will welcome the public 4-6 May 2018.

London-based UDS is best known for its hospitality projects, which include the Ace Hotel in Shoreditch, the pink-toned Odette restaurant in Singapore and the At Six hotel in Stockholm.

Photography is by Raimund Koch.