A concept for a pointed pavilion made from Corten steel pipes and woven goat hair could provide oasis-like respite in the deserts of Jordan.

Architects Dina Haddadin and Rasem Kamal have designed a hybrid shelter and water tower that could provide drinking water, as well as shade in the summer and warmth in the winter.

The concept for the Nomad pavilion was informed by the architecture of indigenous Bedouin's tents and the structure of Jordan's national flower, the black iris.

"The main vision is to create a new interpretation of the authentic tent, a structure that blends with its surrounding yet stands out as a calling sanctuary for visitors in the nomads' land; to become a shaded oasis, a gathering rest spot and a source of fresh drinking water," the architects said in a statement.

In their design, a total of 96 pipes made from Corten steel would be held together by knotted rope made from natural fibres in a complex geometric formation.

Circular in plan, the pavilion is flared at the base, narrowing at the top where a ring holds the poles together. A combination of compression and gravity would hold the structure up.

"The overlapping triangular petals meet at the top creating a round aperture that is open to the sky, covered with a dense fibre net that allows air to escape from the interior during summer, but not for rainwater in winter," said the architects.

A collecting cone made from fabric with a combination of hydrophilic and hydrophobic qualities would harvest fresh drinking water from rain and fog, draining down the hollow steel pipes to an underground holding tank.

Raised on stone blocks, a basin would serve as a water fountain during the desert summers, drawing water from the well-like tank below. In winter, the concave dish is intended to double as a fire pit to warm the shelter. A semi-circle of flat-topped stones would provide a place to sit and rest.

The design uses several subtle techniques that would create space cool during hot days, yet warm during cold nights and colder seasons.

Its concertina structure has a ribbed surface, inspired by those found on desert cacti, which forms a self-shading structure. The steel pipes and natural textiles would create a flexible shape able to sway with high winds. 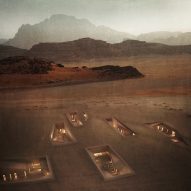 A tent-like covering of coarsely woven goat hair would provide further shade thanks to its dark colour, while the loose weave would allow natural light to filter into the interior.

Diamond smocking would give a 3D structure to the fabric to provide self shading and trap air inside for insulation. The smocking would be done by hand, a process that the architects plan to commission from local artisans in places where the shelters are built.

A passive cooling effect should be caused as the sun heats the dark fabric, the hot air rising to the top of the cone-shaped structure and causing a cooling breeze. At night the fabric will release the heat absorbed in the day, warming the space inside. If it rains or snows, the goat hair fabric swells, effectively sealing shut the gaps in the loose weave.

"It is a permeable space serving as a monument that blends with nature in its form and materiality," said the architects.

"As a result of using local natural materials, water collection and energy efficient space, the pavilion attempts to create a closed loop of existence – one that leaves no footprint, one that gives nature time to heal, to regrow, and to flourish."

Haddadin and Kamal are currently in talks with an investor and working with consultants to test the structure. Next they hope to build a prototype in Jordan and find a sponsor to take the pavilion to Milan Design Week 2019.

For an architectural thesis, Kamal proposed a warren of subterranean bunkers under the Wadi Rum that could provide facilities such as a train station and museum for the UNESCO-protected site without disturbing the surface.

Italian architect Arturo Vittori has designed and built a water tower with a bamboo frame covered in polyester mesh that harvests drinking water from the atmosphere via condensation to provide safe drinking water for communities in north eastern Ethiopia.