Design firm Crosby Studios has created a playful series of purple furniture and home accessories, which is launching as part of the NYCxDesign festival this month.

Hand shapes are found throughout the range of designs in the surrealist collection, which are all the same purple hue.

The pieces take cues from Mexican artist Pedro Friedeberg's iconic hand chair – a plastic replica of which Nuriev acquired from the sidewalk outside his Brooklyn apartment.

Other influences include Italy's Radical Design movement, with references like the baseball-mitt-like Joe chair designed by Jonathan De Pas, Donato D'Urbino and Paolo Lomazzi in 1970.

These precedents can be seen in Crosby Studios' glove-shaped swivel chair, where a palm acts as the seat and the fingers curl up to form the back.

Another chair in the collection is covered entirely in furry upholstery, while a series of purple side tables can be stacked to form a cage-like tower. 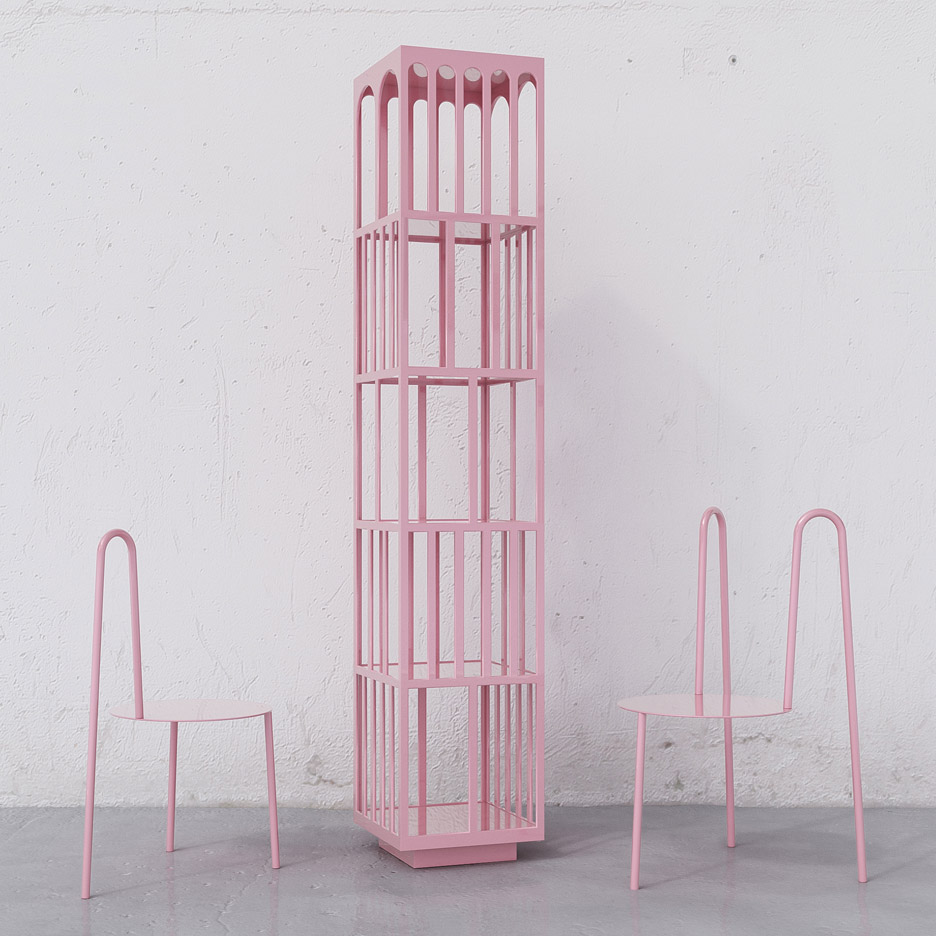 More hand shapes crop up in a range of lighting fixtures, where they form shades at the end of thin branches that extend from the walls or floor.

These rod-like light fixtures that jut out from the walls make reference to French midcentury designer Serge Mouille's spider lamp, which has similarly slender arms.

A bent-wire clothes rail that follows the outline of a hand allows garments to hang from the gaps between fingers, while a rug is shaped to look like it if giving the finger.

The collection is being shown in two New York locations for the NYCxDesign festival at fashion brand Opening Ceremony's store at 35 Howard Street, from 15 to 25 May 2018, and in the Collective Concept presentation at the International Contemporary Furniture Fair (ICFF), 20 to 23 May 2018.

As part of the collaboration with Opening Ceremony, Crosby Studios also designed a set of vases, tote bags and T-shirts with the brand – marking Nuriev's first foray into fashion and ceramics.

Born in Moscow, Nuriev founded Crosby Studios as an interior and furniture design firm in his hometown in 2014. He later opened an office in New York City.

The designer seems to be a fan of purple – he previously used the colour for a dining table that doubles as a merry-go-round, which was presented at the Collective Design fair in March 2018.

Crosby Studios' other projects range from a restaurant in Moscow with a white geometric pattern across its black exterior – referring to designs by the Memphis Group from Italy in the 1980s – to a collection of sculptural chairs with arched metal rods as backs, in pink, gold and black.

Photography is by Mikhail Loskutov, courtesy of Opening Ceremony.