Dezeen's sales team has won a gold award at the British Media Awards, with judges praising our "impressive commercial results".

The team, headed by sales director Wai Shin Li, was named International Commercial Team of the Year at the ceremony, held last night in London.

British Media Awards judges said Dezeen was the "outright winner" in the category and gave a gold award, which is the highest accolade available.

Dezeen's commercial team increased revenue by 47 per cent in 2017 compared to the previous year, with display advertising, recruitment advertising on Dezeen Jobs and brand collaborations all growing strongly.

Judges said Dezeen won for its "impressive commercial results on a distinctive site in a very challenging market."

Highlights in the latter category were our DEZEEN x MINI LIVING initiative exploring the future of urban living; the competition for a TV stand we launched with Samsung; and the party we hosted in Milan with IKEA, which is a contender for the biggest design party ever held. 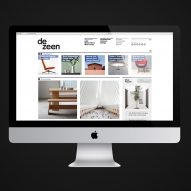 2017 was Dezeen's best-ever year, with a record 53 million visitors and multiple awards. We also became one of the 5,000 most-visited sites according to Alexa, and one of the 1,000 most-commented sites in the world.