MacBook and MacBook Pro users in California have filed a class-action lawsuit against Apple over alleged flaws in the design of its keyboards, which they claim are easily damaged and liable to fail.

The lawsuit was lodged at the Northern District of California court earlier this month, with plaintiffs Zixuan Rao and Kyle Barbaro alleging that the keyboard on MacBook and MacBook Pro laptops are defective and "prone to fail".

"Thousands of consumers have experienced this defect," the plaintiffs claim, referring to the "butterfly" keyboard, which Apple claims is four times more stable that regular "scissor" keyboards. The terms "butterfly" and "scissor" refer to the way the keyboards are sprung, with the butterfly action allowing for a thinner profile.

"When the MacBook’s butterfly keyboard fails, the keys stick and no longer register keystrokes," the lawsuit alleges. "As a result, the user cannot type."

The issue has also affected Dezeen founder Marcus Fairs, who posted an image of his broken Mac Book Pro keyboard on Instagram. 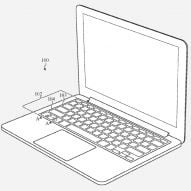 Meanwhile a change.org petition calling for Apple to recall and replace defective keyboards has garnered over 26,000 signatures.

"Recall every MacBook Pro released since Late 2016, and replace the keyboards on all of them with new, redesigned keyboards that just work," wrote Matthew Taylor, who started the petition.

"Because, these keyboards don't work. The problems are widespread, consistent, and infuriating."

The class action refers to Apple MacBook laptops sold since 2015 and MacBook Pro devices sold since 2016, adding that these were sold as "top of the line" models.

The lawsuit also alleges that Apple "knew that the MacBook is defective at or before the time it began selling the affected models to the public."

The plaintiffs claim that when "minimal amounts of dust or debris accumulate under or around a key, keystrokes fail to register". They argue that the flaw means that the product is "unsuitable for its ordinary and intended use".

Appleinsider first reported details of the lawsuit and published details of its own investigation, which found that "the 2016 MacBook Pro's keyboard failed roughly twice as often in its first year of use as 2014 and 2015 MacBook Pro models with scissor-type switches."

It added that the 2017 version faired "a bit better, though the model has not been available for a full year".

Apple was placed at number 10 in the latest Dezeen Hot List of the most newsworthy forces in design.