A system of pulleys are used to raise and lower sections of the walls of this prefabricated cabin on the border between Turkey and Greece, allowing the holiday home to open up to the outdoors or be completely closed during bad weather.

Cabin on the Border was designed by Istanbul architecture studio SO? for a couple with a young child who live in the Turkish city and wanted a retreat they could used to escape to on the weekends.

The cabin is situated in a village close to the city of Edirne in the northwest of Turkey. Its location close to the Aegean Sea means the family uses it for longer periods in the summer but it also needs to provide a sanctuary all year round.

The 18-square-metre building was fabricated at a factory around 300 kilometres from the site and transported on the back of a flatbed lorry to its current plot, where it is nestled among mustard plants. 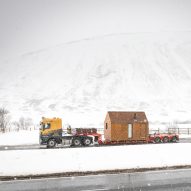 Prefabricated cabin can be transported to remote locations by lorry

Narrow horizontal windows incorporated into the walls provide views of the surrounding countryside and allow daylight to pour into the cabin when the walls are sealed.

A platform bed at one end of the space looks out onto a meadow through a large polycarbonate panel, which can be raised using a pulley. The window opens onto a deck formed by lowering the outer plywood wall.

"On a warm rainy afternoon, the polycarbonate window becomes a canopy to lay under and watch the sky over the plywood facade that becomes a terrace," said the architects.

"On a stormy night, both the window and the facade are shut down, then the cabin becomes like a sailboat in the ocean."

The bed can also be used as a bench for dining at a table that folds down from the wall. Large sliding drawers integrated beneath the platform provide useful storage.

All of the moving walls, furniture and windows are operated using pulleys or by hand as the cabin is off grid and therefore has no source of power.

A ladder placed at the end of the platform can be used to access a bed tucked into the space beneath the ceiling. The bed looks down onto the living area and has its own window offering a view of the countryside.

At the opposite end of the cabin is another bed above the kitchen, which is also reached using the ladder. A section of the wall lining this sleeping area can be lowered to allow fresh air to enter.

The kitchen features simple plywood units that provide the necessary storage and countertop space. A door to one side of the kitchen leads through to a bathroom.

The homogenous plywood interior is interrupted only by the wood-burning stove and the various openings framing views of the green landscape outside.

A slatted timber canopy that extends out from the side of the cabin provides shade to a bench facing back towards a small deck outside the entrance.

The simple design and limited palette of materials enabled the project to be completed at a cost of just €9,800 (£8,560), including transportation.