The Collective Concept exhibition features 12 designers and studios, chosen by the organisers and showing new pieces alongside previously launched items in a set of styled vignettes.

The small exhibition allows Collective Design to maintain a presence during the NYCxDesign festival, after moving its annual event from the May roster to March, to coincide with Armory art week. 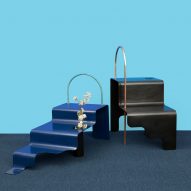 Most of the designers have previously shown at one of Collective Design's exhibitions, which offer visitors a chance to peruse and purchase limited-edition contemporary furniture, lighting, homeware and more.

ICFF runs 20-23 May 2018 at the Jacob K Javits Convention Center, 34th Street and 11th Avenue, during the citywide NYCxDesign, which concludes the same day.

See what the designers and studios are showing at Collective Concept below:

New York lighting studio Allied Maker is presenting a trio of towering floor lamps, in a dark booth with ferns covering the base. The three different designs – all around the same height – include a stack of offset wooden cylinders, a totem comprising various components made from translucent alabaster stone, and a metal stand the supports layers of thin horizontal disks.

Coil + Drift has set up a small scene using pieces from its latest collection, which debuted at Collective earlier this year and also shown in a photography series with dancers. Among the New York studio's range, named Unconscious Forms, are lights made from multiple translucent resin hoops and mirrors concentric ridges carved into their walnut frames.

A set of stone vessels with green and beige stripes are among the new designs that Fort Standard is showing for the occasion. The series accompanies iterations of several of the studio's well-known furniture items, including a soapstone sideboard similar to a large cabinet it presented in 2016.

Following its Collective debut in March, the Gradual by RUX line – an offshoot of lighting brand Stickbulb – has brought the tubular designs that display the passing of time through light effects to ICFF. Layers of paper and velum house arrays of LEDs, which are programmed to "drop" beads of light down the tubes at different time intervals.

The Excavated Vessels by Jeff Martin Joinery is an ongoing project, for which molten glass is blown into moulds made using leftovers from the studio's cork-casting production. The varied designs, which are all unique, are displayed on the studio's tables, including pieces the Neolith and Darcy models.

Fashion brand Opening Ceremony and design firm Crosby Studios teamed up to create a collection of bright purple furniture, with many pieces including hand shapes. The furniture was also shown at Opening Ceremony's Soho store earlier this month, alongside ceramics and apparel created by Crosby founder Harry Nurviev as part of the collaboration.

Three rugs shown by carpet company Rhyme all have similar designs but are each a different shape: square, triangle, circle. The patterns on their dark backgrounds evoke imagery of creatures using curving, swirling lines.

Marble, metal and mirrors all feature in Slash Objects' booth, forming designs based on intersecting three-dimensional forms. The pieces include a marble table supported by two brassy boxes – one of which rest on one edge and poke up through the tabletop – and a tall mirror slotted into a marble cube. Geometric wall tiles by Moonish also feature.

The Coast is presenting a thin metal lamp that see-saws on its two curved legs, gently rocking the light source hidden in its top. The design is shown at Collective Concept in three sizes, including a small version with a touch-sensitive top.

Nuriev has also worked with design brand Vipp on its installation, which looks like a pink-toned laboratory. Several table lamps are sat among glass conical flasks and beakers filled with tinted liquid and sprouting floral arrangements.