HOH Architecten has connected two 17th-century Dutch canal houses that were "separated at birth" to create a new facility for the University of Amsterdam.

The Institute for Advanced Study (IAS), a study centre for science researchers, is spread across two neighbouring townhouses on the Oude Turfmarkt that were once identical.

The brief given to HOH Architecten was to create a 600-square-metre "free space" inside the two buildings.

What the architects discovered when they embarked on the project was that, due to extensive alterations over the years, the two sets of interiors no longer had any visual continuity. But instead of trying to resolve these differences, they decided to exploit them, creating a series of spaces in markedly contrasting styles.

"No wall, floor or ceiling finishing was identical anymore," explained the studio, which is led by architects Freyke Hartemink, Jarrik Ouburg and Carsten Hilgendorf. "One could say the buildings had been reduced to a collection of rooms, of which there are always two with the same proportions."

Built in 1642, numbers 145 and 147 were both designed by architect Philips Vingboons in the Dutch classicist style.

They were commissioned by client Pieter Jansz Sweelinck but, as the architects told Dezeen, "the twins were separated at birth." One became the residence for Sweelinck, and the other was rented out. 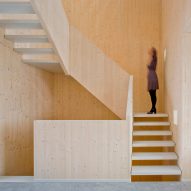 "Different use and different owners left their traces on the premises," explained Ouburg. "The facade of 147 was even completely replaced in 1882, to a design by AL Van Gendt."

"After years and years they meet again, completely different in appearance, but with the same bone structure. In an X-ray, no one would not see the difference."

HOH created a different concept for the revamped spaces. These are: The Green Room, The White Space, Le Ciel Vert, The Dark Room, The Chapel, The Oak Room and The Office. There are also two separate entrance lobbies.

"We accepted the fact that the building was reduced to a collection of rooms and exploited that fact by making the differences even more extreme. Every room would have its own distinctive character," said Ouburg.

Located on the ground floor, The Green Room was the only space with historic details left intact. These included a herringbone-patterned floor and green doors.

The colour of these doors become the theme of the room – walls were painted in various shades, from mint to forest green. The floor was restored and the original chandelier was replaced with a modern version. The space is now used to host presentations and receptions.

On the first floor, the University of Amsterdam wanted to maintain the original layout of the two separate rooms so that they could be potentially rented out in the future. So The White Room is kept very simple.

"Our solution was to create a constructive structure, to make it easy in the future to clad it with standard wall finishing and to hang in standard doors," said Ouburg.

"We painted the structure white and covered it with almost transparent screens. These rooms became working spaces for really concentrated work."

One of the room on the second floor had structural issues, so its original 1970s interior has to be torn down, revealing "beautiful, centuries-old" oak beams. This became The Oak Room, which is now used as a library.

The Dark Room features a black floor to intensify the "gloomy" feel created by the original dark-painted wood cladding. This gives the room a more cosy atmosphere, appropriate for its new use as a venue for "intimate discussions and late night drinks".

"We worked with what was there, with the qualities that were found per room and what came to us during the construction process," said Ouburg.

"It involved seeing architecture as a judo exercise: action and reaction. As a result, IAS has not acquired one dominant house style, but has become a mix of different styles, each room being unique and attuned to the new function and with a materiality, finish and atmosphere," he continued.

"It is precisely through this experience and the cross-fertilisation between different styles, users and spheres that IAS has acquired its own identity. So, in a way, by amplifying the differences on the level of the room, the two houses were brought back together on the level of the building itself."