French designer Philippe Starck has created the interiors for the habitation module of the "world's first" commercial space station, which is due to open in 2020.

Axiom commissioned Starck to create the interiors of the crew quarters, dining area and galley habitation module for the Axiom Station, which is connected to the International Space Station (ISS).

"This is a dream project for a creator like me with a genuine fascination for aviation and space exploration," said Starck.

"My vision for the habitation module on Axiom Station is to create a comfortable egg that is inviting with soft walls and a design perfectly in harmony with the values and movements of the human body in zero gravity," he continued.

Starck wanted his interior design to evoke the feeling of being weightless in the womb, which is similar to astronauts floating in zero gravity.

"A space station is ruled by a fundamental law: zero gravity. Unlike terrestrial life constraints, life in space is a multi-directional freedom," said the designer.

"This dematerialisation shall be a first approach to infinity. The traveller should physically and mentally feel their action of floating in the universe," he added.

According to Axiom, Starck's interiors are designed to enhance life in orbit, and to provide an added level of luxury to its forthcoming space station.

Starck's design includes large, rectangular gold-capped windows with rounded corners that would frame views of the earth below.

The suede-textured walls of each private cabin are dotted with hundreds of nano LED lights that change colour depending on the time, and where the space station is travelling in relation to the earth. 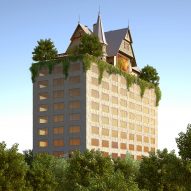 "Just as all the shades of lights and colours of day and night, the egg will also live to the mood and biorhythm of its osmotic inhabitant," said Starck.

The interior will also feature luxurious details such as gold-coloured textile covers on the handles that inhabitants would use to pull themselves through the capsules.

Axiom recently announced the launch of its space tourism program, which will offer private individuals 10-day expeditions to their space station connected to ISS at the cost of £41 million ($55 million) per ticket.

Before the first launch, which is set to occur in 2020, visitors will undergo a 15-week training experience that will be conducted side-by-side with national astronauts.

"It is an honour to continue the work that NASA and its partners have begun, to bring awareness to the profound benefits of human space exploration and to involve more countries and private citizens in these endeavours," said Axiom Space CEO Michael Suffredini.

The Axiom Space Station will eventually replace the ISS, which is scheduled to retire in 2024.

IKEA also recently ventured into space travel, with a collection of space-saving furniture and homeware inspired by life in outer space, designed to cater to people living in micro homes.