Uruguayan architect Rafael Viñoly has revealed plans to add a glazed extension and rooftop garden to a 1920s building in Manhattan, as part of a major overhaul that will create automobile showrooms and office spaces.

Rafael Viñoly Architects is set to renovate 787 Eleventh Avenue, which was built in 1927 by American architect Albert Kahn for the Packard Motor Company.

Updates to the eight-storey building, located in the Hell's Kitchen neighbourhood on Manhattan's West Side, include the reconfiguration of the interiors to make way for five floors of car dealerships on the lower levels.

A new glazed, two-storey structure will be added to the top of the building to create a total of five floors for offices on the upper levels, expanding the total floor area to 37,161 square metres. A 12,000-square-foot (1,115-square-metre) green roof will be set above the addition. 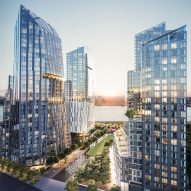 "This transformation of an art deco icon by Albert Kahn honours the iconic industrial building," said the firm in a statement.

The glass will also provide the open-plan offices inside with expansive views of the surroundings.

Employees will have access to private outdoor terraces in the leftover spaces on top of the eighth floor, as well as the rooftop.

To accommodate the extension, the building's facade will be renovated and strengthened. Employee parking will be relocated from the roof to the basement.

Inside, the one-acre (0.4-hectare) floors will provide open, adaptable spaces for commercial tenants. Each will benefit from Kahn's large windows and widely spaced interior columns.

Viñoly will make a number of alterations to the layout, like removing the seventh-floor slab to create one double-height space.

The entrance on the ground floor will also be renovated to include a lobby. From here, a lift will provide access to all of the offices. Bathrooms, fire stairs, and mechanical and electrical distribution spaces will be arranged around the elevator shaft.

Car showrooms will be placed on the ground floor, similar to the current set-up, and accompanied by service areas on the four floors above.

Viñoly founded his eponymous practice in 1983. The firm – which placed at number 146 in the 2017 Dezeen Hot List of the world's most newsworthy forces in design – has offices New York City, Palo Alto, London, Manchester, Abu Dhabi and Buenos Aires.

The firm is also designing a high-end residential building as part of a trio of luxury towers planned for the Manhattan waterfront. Called Waterline Square, the project will be located a few blocks north of 787 Eleventh Avenue, near to BIG's Via 57 West "courtscraper".