A sheet of fresh pasta draped over a large wooden rolling pin was the starting point for this easy chair, created by British designer Damian Williamson for Danish brand Erik Jørgensen.

Williamson said he came up with the form for these panels after observing the way sheets of egg pasta fold after being rolled.

The name Ovo, he said, is derived from the Italian word Uovo, meaning egg.

"I began to examine how this nonchalant expression could translate into an easy chair," explained Williamson. "The upholstery of the backrest and armrest has been folded in the same way as the pasta. Even the soft curvature of the lower corners resembles the fluid perimeter of the pasta."

"The generous soft curved forms appeal to our senses and invite us to engage with the chair. The result is a very tactile object," he added. 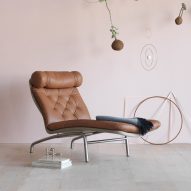 Arne Vodder's 1972 lounge chair gets a rerelease by Erik Jørgensen

Upholstered in leather with stitched seams, the large curved panels are fixed to a squared steel frame that connects the back and the front of the chair.

"The way in which the metal structure integrates with the upholstered elements is the result of my holistic approach to the project," explained Williamson. "The intention is to find a harmonious balance between the respective materials and how they interact with one another."

"The square metal bar is therefore used for the structural base but also to define the edge detail where the two upholstered surfaces meet each other: a key detail that was developed to reduce the number of visible stitched seams to a minimum," he added.

The chair, debuted during Milan design week earlier this year, is designed for use in both public and private spaces,

"I had initially envisioned Ovo being placed in the home," said Williamson.

"However, I believe that good design transcends borders; if successful, it transcends the borders between the domestic and commercial environment. There’s no reason why Ovo couldn't also be enjoyed within the context of a hotel lounge or guest room for example."

The project marks the beginning of an ongoing collaboration between Williamson and Erik Jørgensen, a brand that has been in business since 1970, when its namesake launched the archetypal EJ 270 sofa.

Other projects launched by the brand in the last two years include an illusionary stairway by architecture firm Snøhetta and a coffee table by Swedish designer Monica Förster.